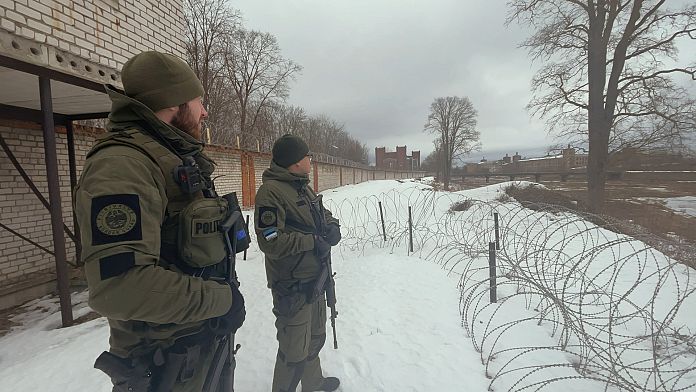 A large Russian-speaking minority lives in the Baltic countries. Are their members manipulated by the Russian leader or are they loyal to the European Union? Estonia is part of NATO. The Alliance guarantees the security of the country. Are Estonians afraid of their big eastern neighbour, Russia? To find out, our reporter Hans von der Brelie traveled to the east of the country, to the external border of the European Union.

As a field journalist, this is clearly the subject for which you do not know what to expect. Only one thing is more or less certain: before my imminent departure, -9°C is announced in Narva, a town at the eastern end of Estonia. Equipped with the appropriate recording equipment and warm clothes, I go to interview Russian speakers from this region to take the temperature of their state of mind as the Russian bombs fall on Ukraine.

As she waits at a bus stop in Narva, an elderly Russian-speaking lady gives me her perspective: “Putin knows what he is doing. If the Ukrainians hadn’t bombed Donbass, nothing would have happened,” she assures. “It’s their fault, the Ukrainians forced Putin to act,” she says.

Anna shows the city to a friend from Russia. “There are people here who are being brainwashed with Russian propaganda TV news,” she believes.

This is why the European Union has decided to withdraw their license from Russian propaganda television channels. A large number of people I meet on the streets of Narva denounce this decision, in particular many Russian-speaking elderly people who have little command of the Estonian language.

This is not the first time that I have been on assignment in this region of eastern Estonia. Over the past 20 years of covering stories for euronews around the world, I have had good reasons to visit this country on several occasions: its accession to the European Union, but also to the euro zone and in NATO, the polluting Estonian oil shale industry, the integration of Russian speakers or even the concern of Estonians after Vladimir Putin’s first aggression against Ukraine in 2014. In 2022, the second Russian intervention in this country once again puts this question on the table: are the Baltic countries also threatened? For years, Russia has tried through state-controlled television channels to influence Russian-speakers living in Estonia.

“My children and I are Estonian citizens!”

More than 70% of the population of the eastern region of the country are native speakers of Russian. In Narva, the Estonian city bordering Russia, this proportion reaches more than 90%. Are its people loyal to Estonia? In the streets of Narva, I hand my microphone to passers-by asking a provocative question: “Where do you want to live? Estonia or Russia?” I am surprised to see that the men and women I interview answer me willingly, they seem to need to share their point of view.

Olga, an older Russian speaker with small glasses, tells us: “Estonia is better because it is a small country, so the state pays more attention to people and therefore there is a better social security system.” Natalia, another Russian speaker accompanied by her daughter, is surprised: “How could we belong to the Russian Federation? Of course, we belong to Estonia! My children and I are Estonian citizens!”

Roman approaches me after an elderly person refuses to talk to me: “Estonia is the threshold of Europe like the threshold of a house,” he believes before adding: “You feel in the European Union by acting as a threshold. When you enter it, you feel at home,” he said.

During the Soviet occupation, Stalin deported many Estonians to Siberia while Russians emigrated to Estonia. It was the time of the forced Russification of the region. Since the country’s “singing revolution” and since joining the EU, many things have changed, but we still have to the challenge of unity in diversity. Today, about two-thirds of native Russian speakers hold an Estonian passport. About 6% of the Estonian population have a “grey passport”, they did not apply for Estonian or Russian identity papers.

Is it easy to integrate into Estonian society as a Russian speaker? Anna assures me yes. After studying law in Moscow for seven years, she returned to her hometown, Narva. While Anna learned Estonian and is now bilingual, her husband only speaks Russian. In Anna’s entourage, not everyone thinks like her. That’s why politics is a taboo subject in his family.

“What difference does it make if I was born in Narva or Tallinn? I speak Russian and Estonian, I have Russian friends and Estonian friends, there is absolutely no discrimination,” she points out.

The impact of the war in Ukraine

Russian propaganda tries to give Russian speakers living in Estonia a victim role. But Anna, who works in the city administration and has an Estonian passport, feels treated like any Estonian.

Today, for her as for many Estonians, the problem is elsewhere. The shelves are empty in the supermarkets. Russian products have been withdrawn from the market. In addition, we are witnessing panic buying because of Vladimir Putin’s war in Ukraine.

The city of Mariupol “completely destroyed” according to Volodymyr Zelensky