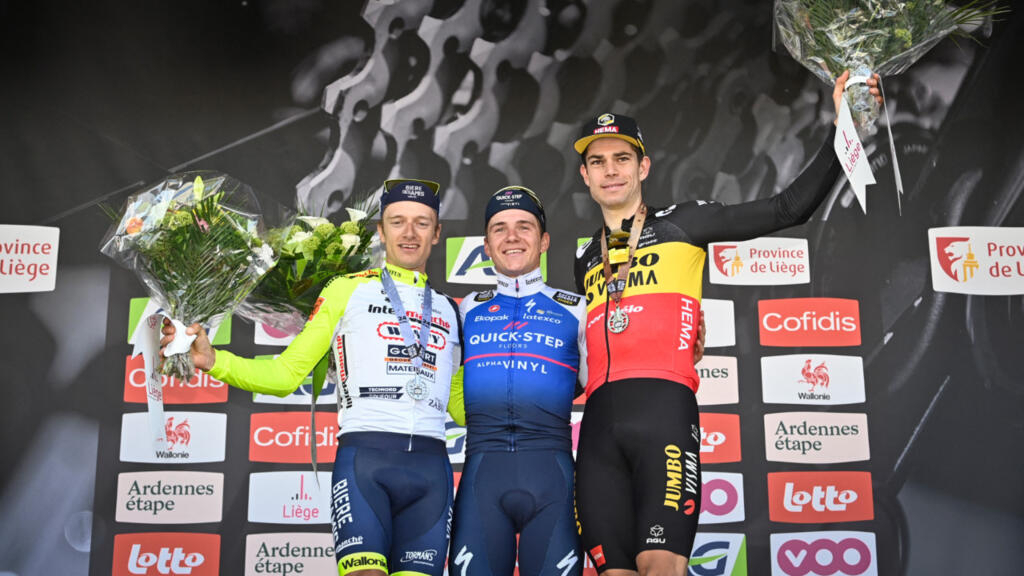 Liège-Bastogne-Liège was won on Sunday by Belgian Remco Evenepoel (Quick-Step), 22. The Frenchman Alaphilippe, caught in a big collective fall that occurred 60 kilometers from the finish, gave up. On the women’s side, the race was won by the Dutch Annemiek van Vleuten, three years after her first success.

The Belgian Remco Evenepoel (Quick-Step) won, Sunday April 24, Liège-Bastogne-Liège, which was prematurely deprived of the world champion Julian Alaphilippeinjured in a fall.

Evenepoel, 22, attacked from afar, 29 kilometers from the finish, for his debut in the oldest of the cycling classics. Two other Belgians, Quinten Hermans and Wout van Aert, also took their place on the podium, 48 seconds behind the winner.

Evenepoel made a violent start on the flat, at the top of the Côte de la Redoute. He joined for a few moments the last survivor of the morning breakaway, the Frenchman Bruno Armirail, whom he then distanced in the last difficulty, La Roche-aux-Faucons, 14.5 kilometers from the line.

“It’s crazy! My first Liège and I win … The dream becomes reality”, reacted Remco Evenepoel. “It was my best day of the year. I wanted to put a ‘bomb’ in the Redoubt and I was able to keep it until the finish. Incredible… I have no words.”

Behind the young Belgian, the chase was carried out at full speed (Bahrain, Movistar, Ineos) but Evenepoel preserved most of his lead, around forty seconds, on the final climb.

“It’s the race of my dreams,” announced Evenepoel, who made a sensational debut in the elite in 2019 by winning the Clasica San Sebastian.

The Belgian had his progress shattered by a serious fall in mid-August 2020 in a descent of the Tour of Lombardy. After a break of several months, he then returned to the highest level.

At 22, he now has 26 wins, including four this season alone.

He signed the first Belgian victory in the Doyenne since Philippe Gilbert in 2011.

For his part, Alaphilippe was caught in a big collective fall which occurred 60 kilometers from the finish (mainly with Pidcock, Bardet and Uran). The Frenchman from the Quick-Step team, who left the race in an ambulance, was notably hit in the back.

“Winning has become more and more difficult in the cycling female”, appreciated the 39-year-old runner and one of the richest prize lists in the peloton. Victorious on the Het Nieuwsblad circuit at the end of February, she then accumulated places of honor (2and the Strade Bianche, the Tour of Flanders and the Flèche wallonne, 4and of the Amstel Ladies).

“I didn’t want to sprint”, added the Dutchwoman from the Movistar team who attacked in the last two difficulties of a very selective course, La Redoute 30 kilometers from the finish then La Roche-aux-Faucons at the start of the last 15 kilometres.

Basketball – NBA: James Harden lifts the veil on his retirement!

Basketball – NBA: LeBron James’ huge reaction after his duel with his protégé!