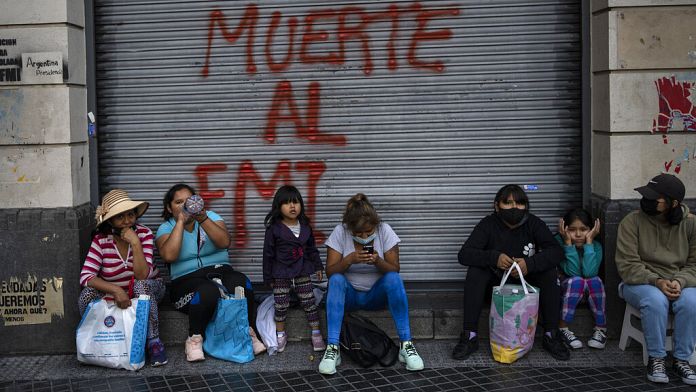 Several thousand supporters of the left in Argentina marched on Tuesday in Buenos Aires to denounce the agreement reached between the center-left government of President Alberto Fernandez and the International Monetary Fund (IMF) on the repayment of a loan of 38 billion euros ($44 billion).

_ “No to the agreement with the IMF, no to the payment of the external debt”_

With the watchword “No to the agreement with the IMF, no to the payment of the external debt”activists from around 200 movements and associations gathered in front of the government palace to demand the breakdown of negotiations with the international institution, AFP noted.

The government of President Fernandez must “remembering Argentina’s history: all agreements with the IMF since 1983 have brought chaos, ended in (structural) adjustments, hyperinflation and huge social crises”told AFP Myriam BregmanMP for the Left and Workers’ Front (FIT).

The government “must prove why it would be different” this time, she added.

On January 28, the Argentinian president announced an agreement in principle with the IMF on the rescheduling of a 38 billion euro ($44 billion) loan granted in 2018 to the government of his center-right predecessor, Mauricio Macri (2015-2019).

The agreement provides for deadlines up to 2036 in return for economic reforms, in particular a gradual reduction in the budget deficit and control of inflation.

According to the government, this agreement will not affect social spending or economic growth.

The agreement “has nothing to do with the needs of the Argentine people, but with an illegitimate and unpayable debt”denounced Vilma Ripollanother FIT official.

The deal still needs to be ratified by parliament where the ruling coalition represents the largest group but does not hold a majority.

The government hopes to define the terms of the new funding program before the March 22 deadline, where 2.49 billion euros ($2.85 billion) must be repaid by Argentina which cannot afford it. , according to the Minister of Economy Martin Guzman.

After three years of recession, the last two of which were linked to the impact of the Covid-19 pandemic, the Argentine economy experienced a strong rebound in 2021, with 10.3% growth for the first eleven months of the year. year (4% planned for 2022).