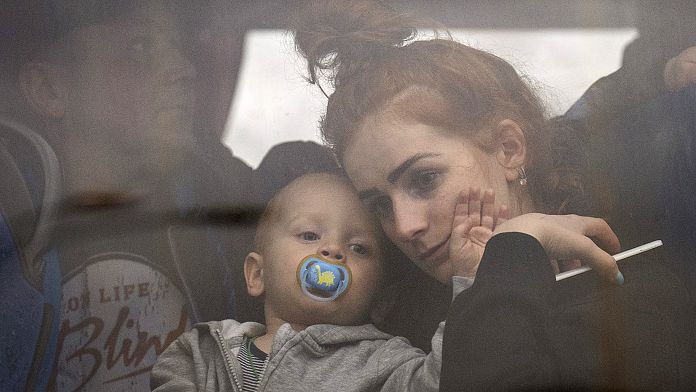 It is 5 a.m. this Thursday, February 24 when Kostyantyn Achkasov wakes up to the sound of explosions and planes flying overhead.

He immediately gets out of bed and connects to the internet. His worst fears were then confirmed: Vladimir Putin’s Russia had invaded Ukraine.

Kostyantyn, 33, then spent the day holed up in his brother’s house in Kharkiv, northeastern Ukraine, with his mother. He does not know when they will be able to leave.

“For now, everyone is staying at home. People put fuel in their car or ran errands. We are all awaiting instructions from the government. It is not safe to travel.“, he clarified.

In the morning, Ukrainian President Volodymyr Zelensky told Ukrainians to stay at home and declared a state of emergency, but citizens across the country began packing their belongings and preparing to leave.

Mykola, 62, lives in the suburbs of Kiev. In the morning, he reported not having seen many of his neighbors leave: “Apparently a lot of people tried to leave. Traffic in Kiev is very heavy. At the same time, among my friends or neighbors, I don’t know anyone who has decided to leave.“
He adds : “Maybe we’ll leave, but only if there’s street fighting….. For now we’re not panicking, we’ve got our survival kits ready –_ small bags and larger bags for different types of situations, depending on whether or not we can go by car. We have a large first aid kit, we have prepared our papers. So far, our animals are the most scared._”

And yet, Kyiv residents flocked to the city’s metro stations, fearing Russian airstrikes and explosions in the city.

The city’s thoroughfares were also quickly clogged with cars heading out of town. Hundreds of vehicles of residents fleeing the country were waiting at the border crossings of Poland, Romania, Slovakia and Hungary.

“The situation at the western border checkpoints remains stable; there is an increase in traffic“, said the Ukrainian Ministry of Internal Affairs reported in the day.

Further west of Lviv, Yulia, 35 years oldexplained that she had started packing and making sure the bomb shelter in her apartment building had everything her family would need.

“Earlier, there were attacks on military installations in the area; now the city is calm, [mais] I am worried for all the other Ukrainians in the cities where the attacks are more intense“, she told Euronews.

“We checked the shelter, saw what was left to go down there, stocked up on water. My husband, daughter and I are not planning to leave yet. It’s not panic, but there’s a lot of anxiety” she clarified.

Elsewhere in Western Ukraine, Nadia Sytch, 42 years olda resident of Lutsk, bombed by Russia this morning, told Euronews: “It’s hard to say how we feel. It shakes us, from time to time, depending on the news that comes in.”

“Overall, we are optimistic. We have no doubt that Putin will die and burn in hell; the only question is at what price… We place our hope in God and in the Ukrainian army“, she added.