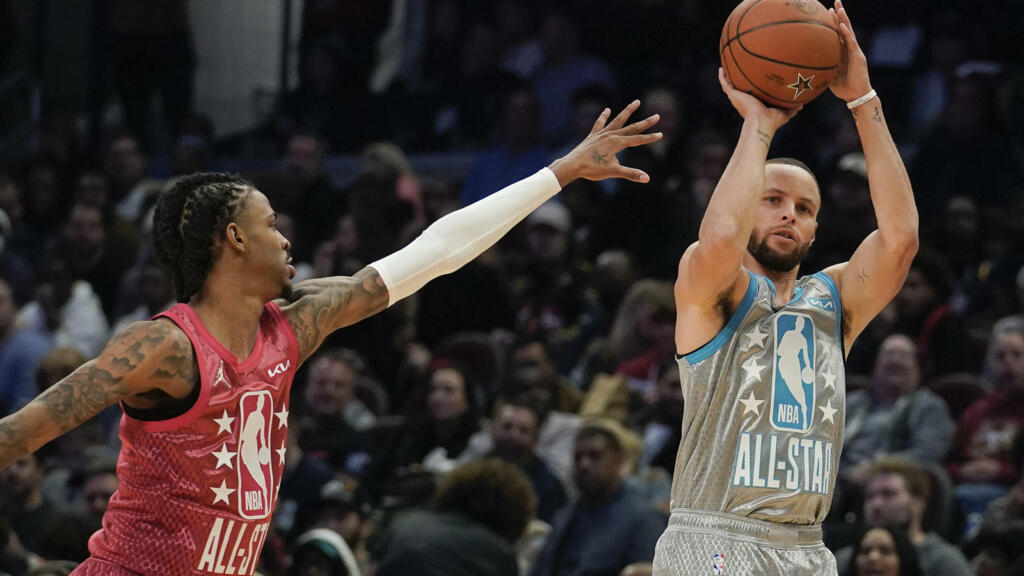 Some 50 pawns in the bag, 16 successful three-point shots and the event record exploded: it was a 2022 All-Star Game with (Stephen) Curry sauce, Sunday February 20 in Cleveland. The leader of the Golden State Warriors, logically designated MVP, greatly contributed to the victory of “Team LeBron” (163-160) for the fifth year in a row.

This star game has kept its promises. Stephen Curry, untenable in the exercise of gunner that he cherishes, was one of the great animators, managing with an insolent skill, which certainly withered slightly in the last quarter, to plant banderilla on banderilla.

“This trophy has a very special meaning, because it’s always something for me to come back to Ohio (he was born in Akron, like LeBron James, editor’s note). I’m blessed,” said Curry, who notably managed a 6/7 in the second quarter, then a 7/10 in the third, planting almost everywhere and further and further.

In particular, there was this unsheathed shot from the center of the field. Without waiting to see the ball go in, he turned around and, quietly heading back to his basket, met the dumbfounded gaze of his one-night teammate, Giannis Antetokounmpo, MVP of this match last year and who already knew the identity of his successor.

The winning basket for “King” James

The “Greek Freak” struggled to make their team triumph in money-time, at which point the notion of a friendly match suddenly disappeared. Because at the end of the 3and quarter, the score was close – 139-138 in favor of “Team Durant” – and the first to 163 points would win.

Giannis (30 pts, 12 rebounds) made some crucial defensive gestures, including a counter on Joel Embiid, the strong man of the season, who was also the opposite throughout the meeting. The Cameroonian pivot (36 pts, 10 rebounds) was also blocked by LeBron James.

“King” at home in Cleveland, where he played for a long time, giving the Cavs their only championship ring in 2016, “LBJ” did not want to lose, he who was undefeated since the application of the current format in 2018, with teams composed by the captains.

“I couldn’t have dreamed of better than putting the winning basket here, near Akron where I grew up, watching the All-Star Game as a kid with my friends,” he commented, after the last shot of the game, turning around, halfway.

Before the meeting took a committed turn, the first period was reduced to an incalculable number of dunks, the goal being to offer as much spectacle as possible.

Most consisted of alley-oops (after passes in the air). In the lot, the one offered by Trae Young (13 pts) to Ja Morant (6 pts), who flew in a backward half-turn to crush the ball in the circle, narrowly missing from hitting his head, will have won the Palm.

For his third participation in a row, Rudy Gobert also went there with a dunk by making a full turn and finished with 6 points and 6 rebounds.

At halftime, between two funky notes of Earth, Wind and Fire, most of the NBA’s 75 greatest players of all time, from legends Kareem Abdul-Jabbar and Jerry West, to Magic Johnson and Hakeem Olajuwon, via Shaquille O’Neal.

LeBron James and Michael Jordan have been the most acclaimed, with Kobe Bryant, who tragically passed away in January 2020 and whose portrait has long been displayed on giant screens.

In a moment captured by American television, Jordan then had fun provoking Magic behind the scenes: “Where are your sneakers? We can go one-on-one right now!”