– The conditions for a first meeting between the Ukrainian president and his Russian counterpart since the start of the Russian invasion are now possible, kyiv and Moscow said after several hours of talks in Istanbul on Tuesday. Ukraine will agree to be neutral if it gets a “international agreement“to guarantee his safety, detailed the chief Ukrainian negotiator in Istanbul, David Arakhamia.

– American, French, British, German and Italian leaders showed up circumspect after the announcement of these advances in the Russian-Ukrainian talks. “We’ll see if they keep their word“, US President Joe Biden told reporters on Tuesday, shortly after meeting with the leaders of France, Britain, Germany and Italy.There seems to be a consensus that you have to see what they have to offer“, he added.

– Vladimir Putin demanded on Tuesday that the Ukrainian “nationalists” to Mariupol “lay down their arms” so that we can “find a solution to the humanitarian situation” in this strategic port, according to a press release from the Kremlin published after an exchange with Emmanuel Macron. Volodymyr Zelensky called the Russian attacks on Mariupol a “crime against humanity, unfolding live before the eyes of the planet”.

– Twelve people were killed and at least 33 others injured on Tuesday in a Russian strike that partially destroyed the building of the regional administration of Mykolaiv, in southern Ukraineaccording to a new assessment given by Ukrainian relief. 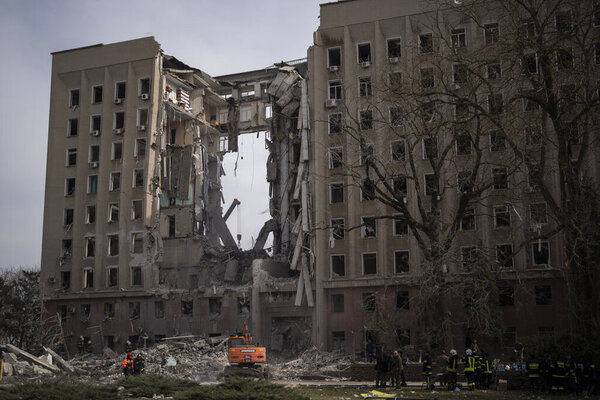 – The number of refugees who have fled Ukraine since the invasion ordered by Vladimir Putin is approaching the symbolic bar of 4 million which could be crossed in the next few days, according to the UN, estimating at almost 6.5 million the number of displaced people inside the country.

– US citizens in Russia are at risk of being arbitrarily arrested by the authorities, warned the United States State Department on Tuesday, which renewed its call not to go to the country or to leave it immediately.

New York: Amazon sees the birth of its first union in the United States