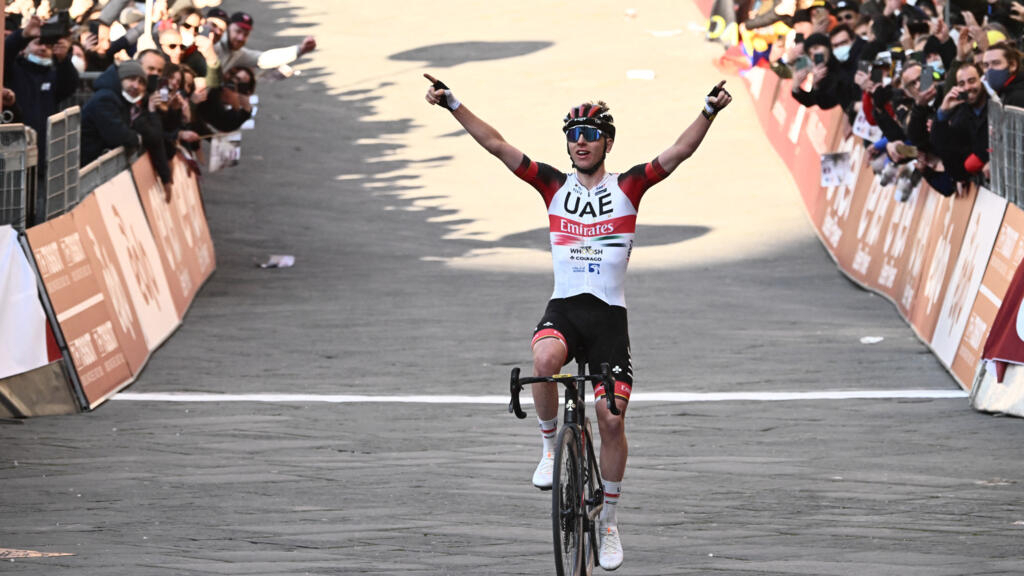 Starting alone 50 km from the finish, Tadej Pogacar won for the first time in his career, on Saturday, the Italian classic of the Strade Bianche, ahead of the Spaniard Alejandro Valverde.

Another victory on the list of Tadej Pogacar. The Slovenian flew over the Strade Bianche on Saturday March 5, the Italian classic which takes stony paths, winning after a solo breakaway of more than 50 kilometers.

Double winner of the Tour de France, Pogacar pushed back his next, the Spaniard Alejandro Valverde, about forty seconds, on the piazza del Campo, in the heart of the medieval city of Siena. The Dane Kasper Asgreen took third place at the end of the 184 kilometers of this recently created race (2007) but very popular in the peloton.

A fall a hundred kilometers from the finish

The Slovenian from the UAE team was caught in a maxi fall about a hundred kilometers from the finish but was able to continue the race, just like the world champion Julian Alaphilippeauthor of an impressive cabriole.

Unafraid of the distance to the finish, the Slovenian went on the attack in a long gravel sector to secure an advantage of almost a minute and a half over the peloton, with Spaniard Carlos Rodriguez intercalated.

If he lost around thirty seconds on his first pursuers before the last 20 kilometers, he then managed the gap both on the stony sectors and on the bitumen. He even offered himself the luxury of clapping in the hand of one of his supporters at the foot of the final ramp.

“It’s incredible!”, Put the outgoing winner of the Tour into perspective in relation to his superiority. “I was always looking behind where the others were, it was really intense.”

At 23, the Slovenian thus won his fourth success of the year. From his first race, he dominated the UAE Tour, with two stage victories in the two summit finishes, and therefore continued with the Strade Bianche, a race he was competing for the fourth time (7and in 2021).