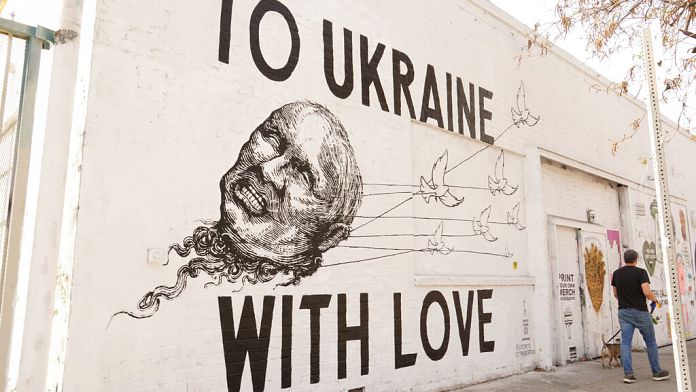 Since the start of the war in Ukraine, many artists have mobilized to express their solidarity with the Ukrainian people. Report with street artists in California.

Since the beginning of the war in Ukraine, many artists have mobilized, as in California. A mobilization to denounce this conflict, to castigate the bellicose attitude of the Russian president, to express their solidarity with the Ukrainians, the civilians and even their president.

The battle of opinion

Seen from the American west coast, the Ukrainian battlefields may seem far away. And yet, the brutal outbreak of the war was like an electro-shock for Californian street artist Corie Mattie.

“I was doing a painting on the difficulties of students to get loans, she says. And then the conflict in Ukraine broke out. __I immediately said to myself that I had to do something about it.”

“I always say that art makes you think, but great art leads to action. __So if my work or that of others can lead you to start a conversation, or even lead you to make a donation for a cause, then we will have had a positive impact.“

For these street artists, paintbrushes can be as powerful as weapons when it comes to winning the battle of opinion.

German elections: the end of the Merkel era and perhaps German conservatives

Being Russian and living in Ukraine: “Kyiv is also my home”