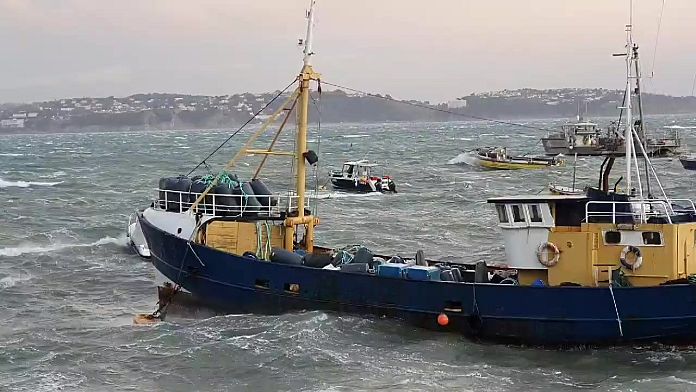 Gusts of winds to 160 km / h, heavy snowfall, debris on the tracks: the north of the United Kingdom was hit hard on Saturday by storm Arwen, which deprived tens of thousands of people of electricity and trained the death of two men. The Met Office, the British meteorological agency, said it expected Saturday to “very strong gusts“, after a night placed on red alert who saw”much of the UK“hit by gusts”damaging“.

“These strong gales caused a lot of disturbance, from the south-west of England to the north of Scotland“, said Marco Petagna, forecaster of the Met Office, which has now lowered the alert level to orange or yellow depending on the region. Two men died Friday evening due to fallen trees, one in Northern Ireland in his car, the other in the north-west of England, said the police in charge of these areas.

In Scotland, several rail lines were cut between Edinburgh, Glasgow and other major cities after a windswept barn landed on the tracks. Many Scottish roads are also closed due to debris on the tracks. About 120 trucks have been surprised by the weather and are now “stuck in the snow” on a motorway in northern England, traffic police said on Saturday, who deployed a snow plow to try to resolve the situation.

Energy supplier Northern Powergrid estimates that violent gusts have left 55,000 of their customers without electricity in the north of England and especially in the county of Northumberland, where the town of Brizlee Wood suffered winds at nearly 160 km / h, according to meteorological records.

Many videos posted on social media show howling winds and raging seas across the country. “People should stay away from the coast because the waves are a danger to their life “, the Met office warned on Saturday. “But we’ve seen the worst and things will start to get better“, qualified Mr. Petagna, even if the meteorological agency always advises to move only in case of absolute necessity, because it still foresees” d_e snow and rather strong gusts of wind_. “