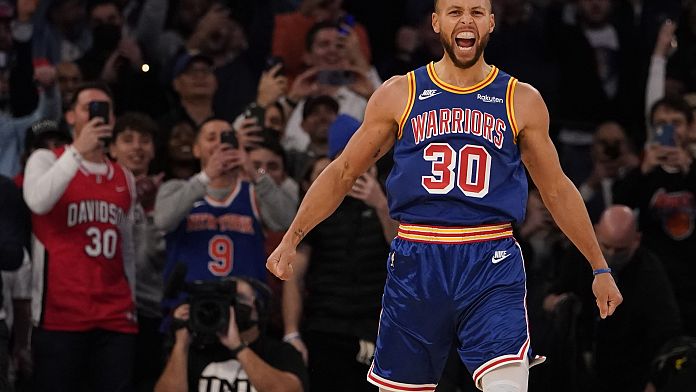 Stephen Curry made NBA history, becoming the best three-point shooter of all time. Tuesday night, in New York, in the mythical Madison Square Garden, the number 30 of the Golden State Warriors overtook master Ray Allen by scoring a 2,973rd three-point basket. It took him 511 games less than his predecessor to get there. Another record … And at 33, he still has many good years ahead of him.

“It’s exciting to see Steph break this record. He revolutionized the way basketball is played and continues to leave fans in awe with his amazing art and extraordinary shooting ability. Well done for this historic achievement.”, reacted the boss of the league Adam Silver.

Chamberlain’s 100 points in one match

It was certainly another time, that of basketball, less physical, less rough defensively, during which Wilt Chamberlain, taller, more powerful, stronger than the others, ultra-dominant, had no equal. On March 2, 1962, in the Warriors jersey, when he played in Philadelphia, he scored a trifle of 100 in the victory against the New York Knicks (169-147). This record is still valid for a North American League game and the one who came closest to it was Kobe Bryant (82) in 2006 with the Lakers against Toronto. Chamberlain holds other records, including the remarkable best rebounder of all time with 23,924 catches.

The legendary hub of the Milwaukee Bucks – when he was called Lew Alcindor – and the Los Angeles Lakers accumulated a total of 38,387 points during his two-decade career (1969-1989), the most for a NBA player. His runner-up in this ranking is former Utah Jazz strong winger Karl Malone, who finished with 36.928 points. He should soon be overtaken by LeBron James, who currently has 35,787. As to whether the Lakers superstar can come close to Abdul-Jabbar, it will depend on his longevity on the floors, he who will be 37 years old on December 30.

Bill Russell, “The Lord of the Rings”

The 60s, again. At the time, it’s simple there was only one team in the NBA, the Boston Celtics. And their captain, their warrior, their snowshoe master is called Bill Russell. The balance sheet of this domination is dizzying, since the pivot has more champion rings – 11 – than he has fingers to put them on. Now 87 years old, this legendary player was indeed crowned with the C’s for the first time in 1957, then eight times in a row between 1959 and 1966, and finally in 1968 and 1969. His former teammate Sam Jones was. ten times – he was not in the 1957 title. In recent times, Robert Horry has been the most successful, seven times with three different clubs (Houston, Lakers, San Antonio).

Jordan and his 30.1 point average

Considered by many to be the “GOAT” (Greatest of All Time – the greatest basketball player in history), no offense to LeBron James who continues to challenge him this status, Michael Jordan retired permanently in 2003 with a average of 30.1 points per game, the best in history. Chamberlain follows close behind with 30.07 points, while two remaining active players are in the top 6: Kevin Durant (Brooklyn Nets), fourth with 27.1 points, and James, sixth with 27 points.

Westbrook, the king of the triple-double

Current Lakers playmaker Russell Westbrook last season broke a long-unreachable record for the most triple-doubles a player has achieved, ten or more in three different statistical categories ( points, rebounds, assists, interceptions or blocks), which had been held by Oscar Robertson since 1974. It was on May 10, in the jersey of the Washington Wizards, that “RusWest” managed the 182nd triple-double of his career. Like Curry, he too is able to carry it to unattainable heights. At this stage, it is at 189.