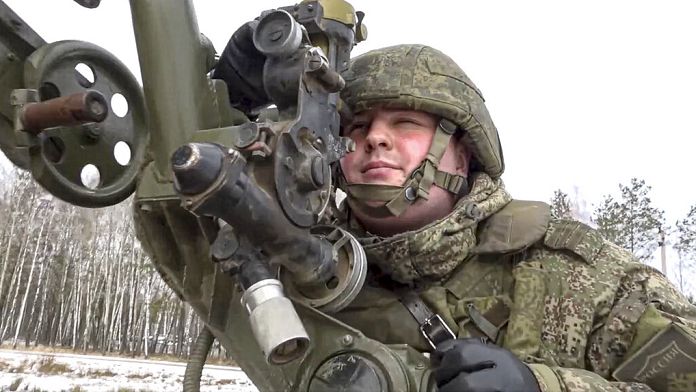 Moscow and Minsk began this Thursday ten days of joint military exercises in Belarus in a climate of international tensions around the Ukrainian question.

“The exercises take place with the objective of preparing to stop and repel an external aggression within the framework of a defensive operation”the Russian Defense Ministry said in a statement.

On the eve of the start of these exercises, the Russian Ministry of Defense released a video showing their deployment in Belarus.

This deployment of troops and weapons is in addition to the hundreds of thousands of soldiers that the Kremlin is accused of having massed on its border with Ukraine, and which make Westerners fear a possible Russian invasion in Ukraine.

Russia denies this and urges the United States and its allies to curb NATO’s deployment in Eastern Europe, and to ban Ukraine from joining the Alliance.

Hopes of averting a war in Ukraine were growing on Wednesday after the intense diplomatic activity of the past few days, which offers “real chance” of de-escalation according to Kiev, the Kremlin like the West noticing the first positive signals.

“Today there are real chances for a diplomatic settlement”welcomed in Kiev the head of Ukrainian diplomacy Dmytro Koulebafor whom the situation remains “tense, but under control”.

The threats of sanctions “unprecedented” in the event of an attack on Ukraine by Russia, as well as the talks of recent days could remove the specter of a war in Europe, wants to believe the Ukrainian government.

The German Chancellor Olaf Scholz also showed optimism, welcoming Wednesday to the “progress” born of the resumption of intense diplomatic exchanges between Russia and the West. “The mission is to ensure security in Europe and I believe that we will achieve this”he added.

The French presidency also welcomed on Wednesday the fact that the tour ofEmmanuel Macron in Moscow, Kiev and Berlin has reached its “goal” by allowing to“to advance” to calm the situation.

It is now about “to allow everyone to take a break and consider the means of de-escalation (…) in a moment of growing tensions” on the Russian-Ukrainian border, according to the same source.

The position of the German chancellor closely observed

Russia is preparing to receive the head of British diplomacy Liz Truss, for a two-day trip. The Prime Minister Boris Johnson is going to Poland on Thursday, where the United Kingdom intends to deploy additional soldiers.

It is in this context thatOlaf Scholz is increasing its involvement, in response to criticism in recent weeks of its discretion and supposed appeasement of Moscow.

After welcoming the head of the Danish government on Wednesday Mette Frederiksenthe successor of Angela Merkel will receive on Thursday the leaders of the Baltic countries, neighbors of a Russia which worries.

Despite the announcement of the dispatch of 350 more German soldiers to Lithuania as part of a NATO mission, Berlin’s reluctance over Estonia’s delivery of German weapons to Kiev has created tensions these last weeks.

After his visit to Washington on Monday, intended to reassure the Americans, then the meeting on Tuesday in the German capital of the Weimar Triangle, formed with France and Poland, Mr. Scholz is walking on a thread, between the expectations of his Western partners and his country’s dependence on Russian gas.

The reserves of this hydrocarbon in Germany have also fallen to a level “disturbing”below the critical threshold of 40%, the government announced on Wednesday.

The high point of this diplomatic activity: the long-awaited visit that Olaf Scholz will make to Vladimir Putin on February 15, the first since his election to the chancellery at the beginning of December.

Lack of allies, Russia gives up on a vote on Ukraine in the UN Security Council