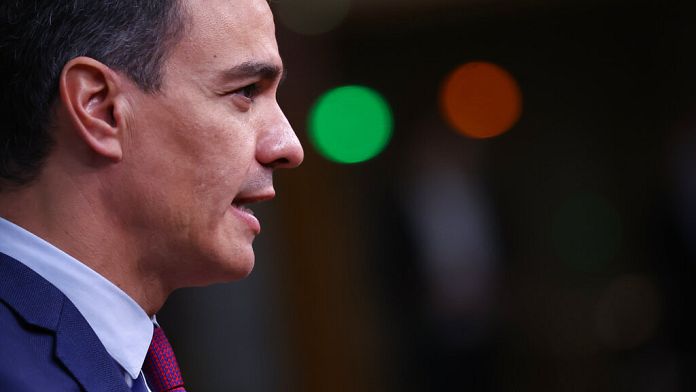 Abandoned by some of his allies, the Spanish left-wing Prime Minister Pedro Sanchez managed on Thursday to save in extremis his labor market reform, insistently demanded by Brussels, thanks to a voting error by a right-wing deputy..

After long negotiations marked by reversals and then by a twist of fate, the government obtained a majority of one vote (175 against 174) in favor of its text, which aims to reduce the precariousness of the Spanish employment market .

According to the People’s Party (right), it was one of its deputies who unknowingly swung the future of the reform: because of a “computer error“, he would have voted in favor of the text without being able to correct his choice afterwards.

It’s about a “anomaly” that must be “rectified“, insisted during a press point the spokesperson of the PP in Congress, Cuca Gamarra.

This error did not prevent Pedro Sanchez from congratulating himself. “Spain has a new framework” Who “gives pride of place“, “thank you to the groups who supported this great agreement“, he wrote on Twitter.

The adoption of the labor market reform was one of the conditions set by Brussels for the disbursement of the funds provided for in the framework of the European mega-recovery plan, of which Madrid is one of the main beneficiaries with 140 billion euros .

Coming into force on January 1, as part of an agreement sealed with the employers and the main trade union federations, this reform had to obtain the green light from the deputies under penalty of remaining a dead letter.

However, the negotiations turned out to be more difficult than expected: the Socialist Party (PSOE), which governs with the radical left movement Podemosbut without a majority in parliament, failed to rally several of its traditional allies.

The Basque nationalists of NVP and the Catalan separatists ofERC thus voted against the text. This refusal forced pedro sanchez to seek the support of Ciudadanos (center right), after having hoped for a time for the rallying of two deputies from theUPN (right), who finally failed.

This reform isundoubtedly one of the most important of the entire legislature, and we have always” research “the support of the largest number of political forces“, justified on Thursday the spokesman of the PSOE, Felipe Sicilia.

Thursday morning, several heavyweights of the government had stepped up to warn the deputies against the consequences of a rejection of the text, defended both by the unions and by the employers.

“Those who vote against will have to explain themselves. Because in reality, there is no good reason to oppose labor market reform that will create quality jobs“, had warned the Minister of the Economy Nadia Calvino.

“To turn your back on this reform, to reject it, to drop it, would be to go back to square one.“, had insisted the Minister of Labor Yolanda Diazcalling for abandoning the “nefarious pattern“resulting from the reform of the People’s Party in 2012.

This reform, adopted under the former Conservative Prime Minister Mariano Rajoyand on which pedro sanchez had pledged to return, had been set up to revive the Spanish economy, devastated by the 2008 financial crisis.

According to its defenders, it has allowed a sharp drop in the unemployment rate, which has fallen from nearly 27% in 2013 to 13.3% currently. But for its detractors, it has caused precariousness to skyrocket, Spain holds the European record for the rate of temporary contracts%2C%20according to%20Eurostat.).

Negotiated for months with the social partners, the text plans to limit the sequence of fixed-term contracts by hiring under permanent contracts “the rule and no longer the exception” and limits the use of subcontracting.

It also prohibits the dismissal of civil servants for economic reasons, strengthens training and allows companies to temporarily derogate from the rules in force in times of crisis to avoid layoffs.