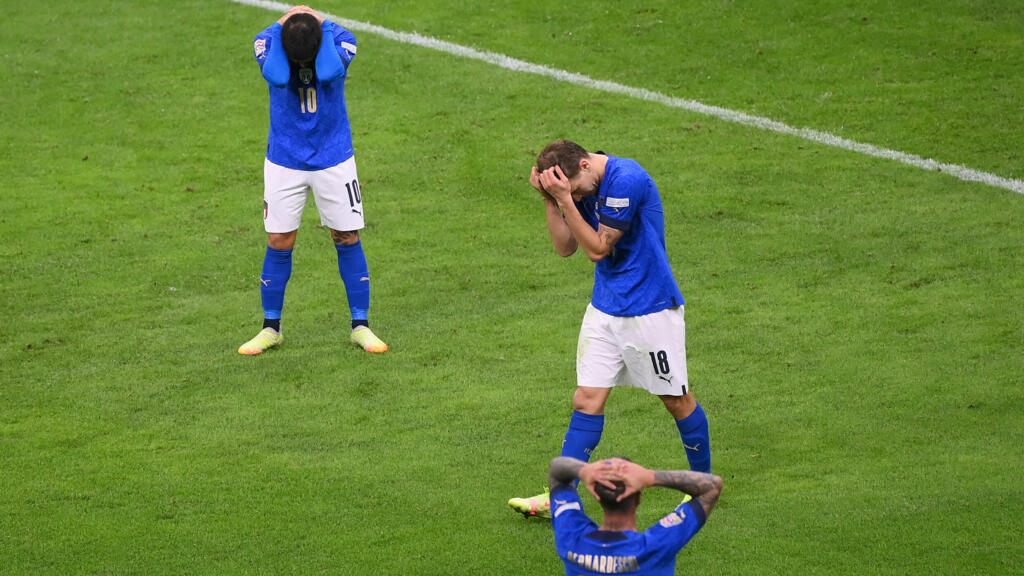 Spain comfortably beat Italy 2-1 at home in Milan in the semi-finals of the Football Nations League, ending a 37-match unbeaten run for the European champions on Wednesday.

Bonucci expelled, Donnarumma booed, San Siro insufficient… Italy, after three long years without defeat concluded by a title at Euro-2021, was brutally brought back to earth, Wednesday 6 October, in Milan, by a daring Spain (1-2), who will play the final of the Nations League against France or Belgium.

By taking revenge after the cruel penalty shoot-out at Wembley in the Euro semi-final three months ago, La Roja ended the European champions’ 37-match unbeaten run, the record for a national side.

“It had to happen, sooner or later, to choose it’s better tonight than in the final of the eUros”, estimated Roberto Mancini.

>> Euro-2021 : Roberto Mancini, the coach of the Italian renaissance

A double by Ferran Torres (17th, 45th+2) and the exclusion of captain Leonardo Bonucci (42nd) stunned Italy before the break. Sufficient, despite the late goal of Lorenzo Pellegrini (83e) that reignited the San Siro volcano on the last minutes.

Deprived of many EURO holders, the Spanish coach, Luis Enrique, went for the final with his boldness: he launched the FC Barcelona midfielder Gavi, who became the youngest player to wear the jersey of Spain at 17 years. Villarreal winger Yéremi Pino, 18, also got his first.

Well supervised by the experienced Sergio Busquets and Koke, Gavi displayed a sacred composure against Marco Verratti and Jorginho.

It was even the captain azzurro Leonardo Bonucci who lost his nerves: his yellow card for contestation (30e) weighed heavily when arrived the second for an aerial elbow.

Spain took the lead in the aftermath, leading the atmosphere at the San Siro, this stadium where the Nazionale lived one of the worst moments in its history, deprived of the World Cup-2018 in qualifying play-offs against Sweden (0-0) in November 2017.

Playing at home, in front of 37,000 spectators (maximum possible, with a capacity still limited to 50% in Italy), will not have been enough.

The ex-Milanese Gianluigi Donnarumma would have preferred to be far from the San Siro, to escape the whistles that fell on him from tifosi rossoneri not having forgiven his departure for Paris SG.

The hero of the “magic nights” of the Euro tried not to react but he displayed an unusual feverishness, releasing a ball a priori easy on his post (19e).

On the other hand, “Gigio” has nothing to blame for the Spanish goals: Ferran Torres scored two perfect saves, at the near post, from the millimetre crosses of Mikel Oyarzabal.

“It’s heartbreaking, it was Italy playing, it was not a club game. I think we could put that aside for one night”, regretted Mancini in press conference about these whistles.

Without their injured centre-forward Ciro Immobile, Italy still tried but could not concretize their great chances at eleven against eleven.

Federico Bernardeschi, starting in a “false nine” position, saw his shot deflected off the post by Unai Simon (34′), and Lorenzo Insigne missed the target in the ideal position (35 ‘).

At ten against eleven, Nazionale attacked with two, insufficient despite the entries of Moise Kean and Pellegrini, author of the goal of hope.

Italy and Jorginho will not win another trophy in 2021. But Donnarumma will not be unhappy to go play Sunday in Turin, where the “small final” will take place against the beaten France-Belgium on Thursday night.