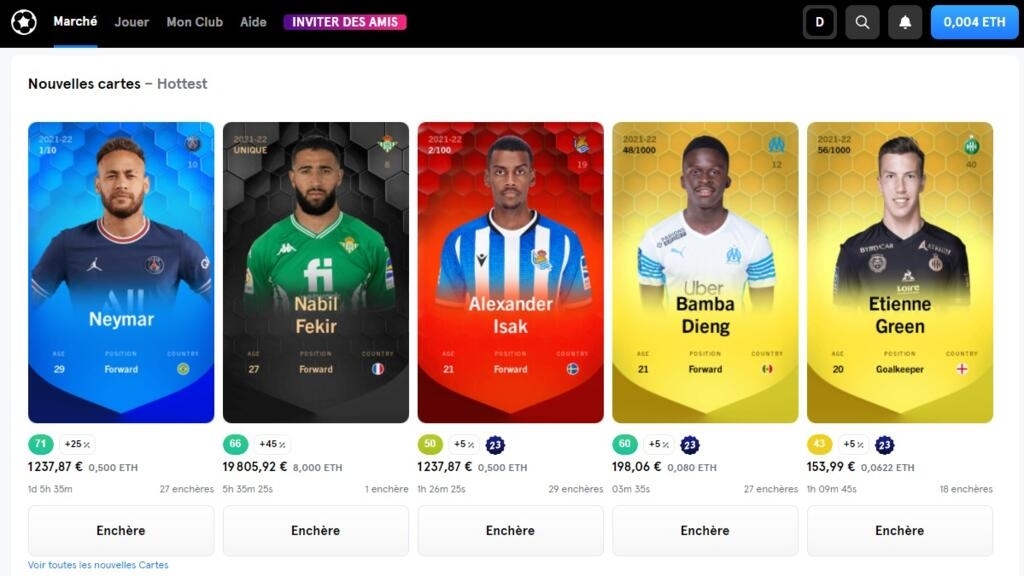 The Sorare company has just raised 680 million dollars (or 580 million euros), a record for the tech sector in France that confirms the appeal for this application, a mixture of Panini thumbnail collection, “Football Manager” and stock transactions based on NFT technology.

The young shoot has golden buds. The French start-up Sorare announced, Tuesday, September 21, that raised $ 680 million (580 million euros) which is a record for the new technologies sector in France. With these new means, Sorare, an online game at the crossroads of speculation and” fantasy football”, aims big.

Now valued at 4.3 billion dollars (or 3.7 billion euros), the young Parisian company founded in 2018 claims the first place of the French “unicorns” (unlisted companies worth more than $ 1 billion).

The young French sprout has been walking on the water in recent months. At the beginning of September, it announced a partnership with the Spanish football league, allowing it to have licensed the first and second division clubs of the Spanish championship.

Despite the lack of publicity and his lack of fame among the general public, Sorare is supported by well-known investors, such as footballers Gerard Piqué (FC Barcelona), Rio Ferdinand (Manchester United), Antoine Griezmann (Atlético Madrid) and César Azpilicueta (Chelsea).

In this game using blockchain technology [technologie de stockage et de transmission sans organe centrale de contrôle], users buy and sell cards of football players, the value of which depends on the performance in real matches. Users compete against each other using these cards by forming teams of five – a goalkeeper, a defender, a midfielder, a striker and a joker. Each receives a score out of 100, calculated by an algorithm fed by the figures of the statistician Opta, the scores of the five players of the team being boosted by the value of the card, and then added up.

Card are non-fungible tokens (or NFT, for “non-fungal token” in English). There are several scales of rarity. Unique cards, one per player per season, give the best bonuses. They are auctioned by Sorare every minute – this is where the company makes its winnings. The record is held by a unique Cristiano Ronaldo card, sold for the modest sum of 280, 000 dollars (about 239, 000 euros).

Currency exchanges are done in Ethereum, a cryptocurrency, even if on the site the amounts are indicated in euros.

Sorare claims more than 250,000 active players, of which between 30,000 and 40,000 have at least one paid card. The rest is content with the unlimited free cards offered at the beginning of the game, but which very quickly turn out to be outdated.

A time-consuming and addictive game

The ways of using the platform are diverse. Some try to collect their favorite players to build a dream five. Others join the platform for purely speculative purposes, trying to get hold of chips at low prices and resell them when the player performs and his card thus increases in value.

“I have a friend who only does ‘trading’, he buys injured players and sells them with added value, ” says Julien Bochereau alias Kinshu, a 36-year-old journalist covering the gambling industry interviewed by AFP as part of an investigation into Sorare. “Today my gallery is worth between 30,000 and 40,000 euros. From the start, I invested 15,000 euros, and I do not regret at all.”

Playing at a high level is expensive. Jordan, another player contacted by AFP, explains that he invested “6,500 euros between May and October 2020 “and” then I improved my gallery by reselling players and winning cards. On resale, I estimate to have made 18 000 euros net profit”.

Sorare currently has 30 employees, but wants to increase to 200 next year by taking advantage of the new financial windfall.

“Our ambition is to create the world’s first entertainment group in the world of sports,” said the company’s co-founder, Nicolas Julia. “This amount allows us to focus on our product until a potential IPO in a few years.”

It must also form new partnerships with clubs and leagues that will collect royalties from the use of their brand and require a guaranteed minimum income. Sorare eventually aims to be associated with the twenty biggest leagues of world football.

Sorare also wants to go international by opening an office in the United States, where the public has a better knowledge of NFTs and cryptocurrencies as well as a strong tradition of trading cards.

“Giants will emerge in the crypto and NFT sector. This is no longer a fad of a few hackers [pirates] who would be looking to make money on an unreal asset, ” says Matthieu Lattes, co-founder of White Star Capital, who recently created a fund dedicated to these start-ups. According to him, this record raising also demonstrates the “maturity” of growth start-ups in France, as are the IPOs of French tech companies (Believe recently and OVHcloud soon).

However, grey areas remain in Sorare’s business model. First, relying on cryptocurrencies for its transactions, the game is subject to market volatility. Moreover, as the market is innovative, regulation is still in its infancy

“The NFTs are still unclear in the regulations in France. Innovation is going too fast for the regulator, ” says KPMG France blockchain director to Challenges.

Finally, the NFTs could also be caught by the regulator because of their pecuniary nature, Sorare could thus be considered a gambling. The stock market of the app can make the gain of a quick fortune and push to invest large sums at the risk of losing them. While the harmfulness of sports betting was highlighted during Euro-2021, Sorare could be regulated for public health reasons.

for Senegal, failures “belong to the past” before the final against Egypt