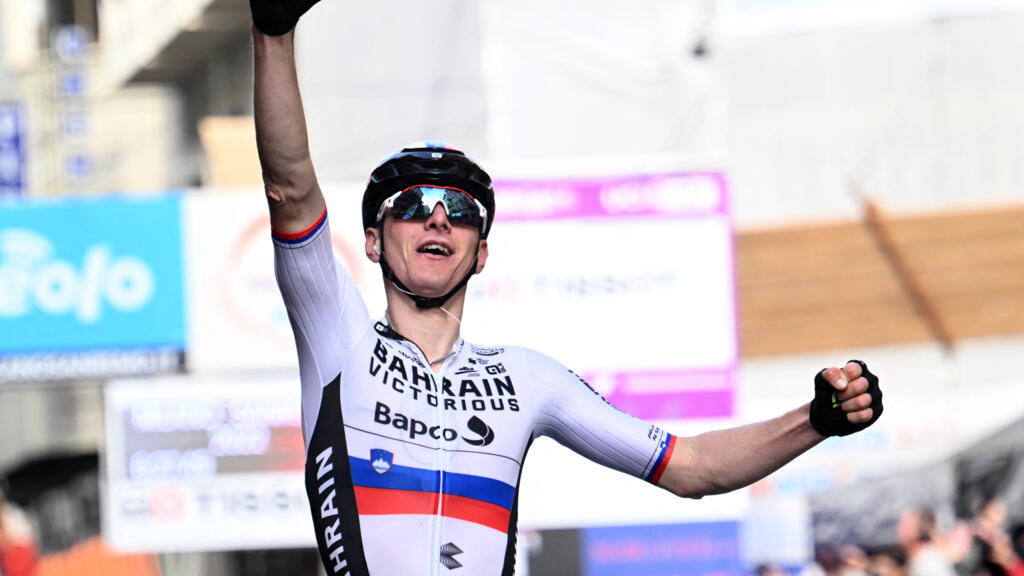 Slovenian Matej Mohoric, from the Bahrain team, won Milan-Sanremo on Saturday, the first great classic of the cycling season over 293 kilometers.

Matej Mohoric clinched victory on Saturday March 19 in the Milan-San Remo, the first great classic of the season cycling. The favorites were therefore beaten. Tadej Pogacar, the Slovenian winner of the Tour de France, took 5th place in the “classicissima” and the Belgian champion Wout van Aert, closely marked, 8th after 293 kilometers.

The 113th edition of the Primavera, the second fastest in history (at an average of 45.331 km/h), was played out in a few tight turns, in the toboggan descending towards Sanremo. Mohoric took all the risks to secure a 5-6 second lead, even if it meant benefiting at times from the wake of a motorcycle that couldn’t go any faster. He kept the gap through the streets of Sanremo on his watchful pursuers.

At 27, the Slovenian won his first major classic. Former world junior champion then hopes, he made himself known above all by being the inventor of a very aerodynamic position in the descents, now prohibited by the regulations.

Double stage winner last year on the Tour de Francehe had accompanied his second success with an unequivocal gesture, to close the mouths of the detractors of the Bahrain team which had previously been the subject of a search for suspicion of doping.

This time, Mohoric performed a high-flying number to continue the series of his team, victorious last October in Paris-Roubaix thanks to the Italian Sonny Colbrelli. “I took risks in the descent but that’s what allowed me to go for the victory. It was my only chance, provided I avoided the error”, commented the Slovenian who used a telescopic mountain bike saddle to adopt an ideal position in his favorite exercise before raising it again.

“I thought about this race all winter”

“I thought about this race all winter, I knew this race could suit me”, estimated Mohoric who said he saw his hopes vanish by the maxi-fall that occurred at the beginning of the month. at Strade Bianche. “Fortunately I was able to continue training.”

Behind him, Anthony Turgis signed his best result (2nd), 2 seconds behind the winner. The Frenchman, who left on the counterattack under the red flame, preceded the first group settled by Mathieu van der Poel, the brilliant and omnipresent Dutchman for his first race of the season both in the Cipressa and in the Poggio, the last two climbs of the race.

The Cipressa, climbed at high speed by Pogacar’s men, reduced the peloton to around thirty units. The Poggio was used by the winner of the Tour, master artificer, to dynamite the group, by four successive accelerations. But van Aert, vigilant, and van der Poel kept in touch with the Slovenian, as did the Dane Sören Kragh Andersen, the first to reach the top with his three companions. With a few lengths ahead of Mohoric who was going to take the lead in the descent, narrowly avoiding leaving the road.

“Mohoric’s attack didn’t surprise me,” commented van Aert lucidly. “If he was still there after the climb, I was sure he would try something on the descent.”

Usual antiphon in the final of the classics, the Belgian explained that he did not find the competition hoped for afterwards: “There was not much collaboration. I ran to win, as always. Mathieu van der Poel too but the others quickly thought of the podium. It’s their right but I prefer to fight.”

Basketball – NBA: The great ambitions of Evan Fournier at the New York Knicks!

Tunisia dismisses Mali and validates its ticket for Qatar

Basketball – NBA: The huge exit of Joakim Noah on his rivalry with… LeBron James!

despite doubts, OM hope to get a taste of a European final