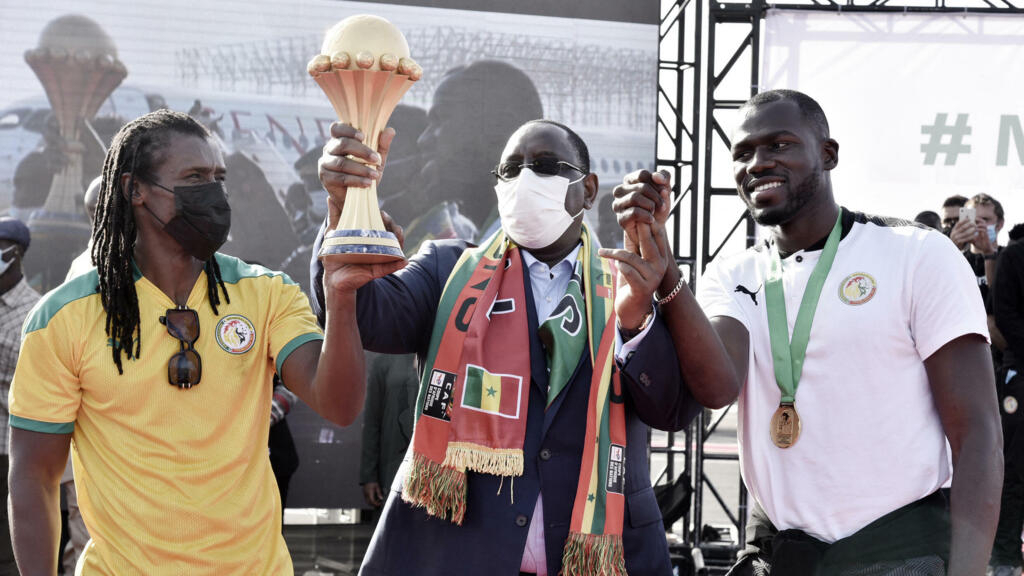 It is still euphoria in Senegal where President Macky Sall rewarded Tuesday the heroes of the national team, players and members of the delegation, who won the African Cup of Nations for the first time. Each of them will receive a bonus of around 75,000 euros and two pitches in Dakar and Diamniadio.

The Senegalese President, Macky Sall, rewarded, Tuesday, February 8, the players of the national football team, winners for the first time of the African Cup of Nationsworth around 75,000 euros each and two sites in Dakar and Diamniadio.

The Senegalwho had welcomed the return of the Teranga Lions on Monday by a real human tide in the streets of the capital, paid a more official tribute on Tuesday to the African champions, received at the presidential palace.

The Head of State expressed, in front of several thousand people, how much Captain Kalidou Koulibaly’s team had fulfilled the expectation of a nation that vibrates for football and put an end to the frustration of entire generations.

“We dreamed of the cup, you built that dream and you made it come true. Finally, here is the African Cup of Nations in football,” he said.

“You have honored the nation, in return the nation you are so proud of owes you honors,” he said.

The Senegalese president decided to decorate the players and all the members of the delegation, i.e. more than 60 people in total, in the National Order of the Lion, or to raise them in rank for those who had already been distinguished by the past.

Objective “semi-final” at the World Cup

The players and the members of the delegation will receive a bonus of 50 million CFA francs each (about 76,000 euros), a considerable sum by Senegalese standards, a plot of 200 square meters in Dakar, and another of 500 square meters in the new town of Diamniadio, whose development is dear to the Head of State.

Sadio Mané, rewarded with coach Aliou Cissé with special praise from the President, capsized an entire country of happiness on Sunday by scoring the decisive shot on goal against Egypt in the CAN-2022 final.

Senegal, the stronghold of African football, the continent’s first in the FIFA rankings and a major supplier of talent abroad, dreams of other glorious tomorrows.

Macky Sall, who had set the goal for the coach and the players to return with the title before their departure for the CAN in Cameroon, turned his eyes to the 2022 World Cup in Qatar at the end of the year: “Aliou , I’m not asking you to win the World Cup, but a place in the semi-finals”, he said.

Senegal will first have to qualify. This will go through a barrage at the end of March, again against… Egypt.