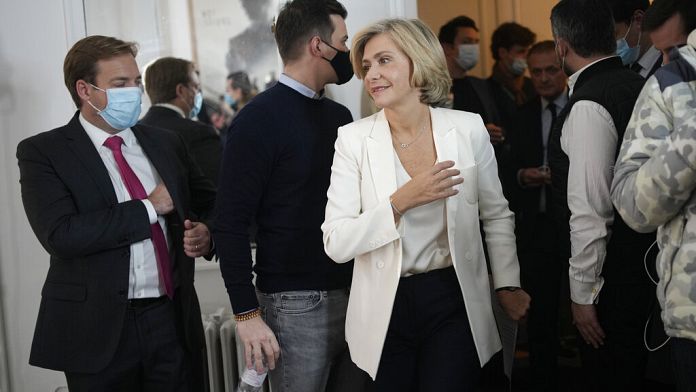 Who to bring the right to the presidential election? Faced with Eric Ciotti who seduces the right wing, Valérie Pécresse approaches Friday the second round of the LR congress strong of many rallies which place her as a favorite.

“I am a woman who wins and who does“, assured Thursday after the first round the president of the region Ile-de-France, by boasting of a”ability to bring together all the sensibilities of the right“: according to her, “on the Elysée side, they will have to rewrite their scenario“a second round against the far right in April 2022.

“Dare the right because we need it“, Eric Ciotti told him, praising a project faithful to François Fillon”which best corresponds to what right-wing voters expect in this country“.

Since midnight Thursday evening, the two candidates are bound to a duty of reserve which will end with the announcement of the results, Saturday at 2:30 p.m.

But while the second round has been launched since Friday morning, Valérie Pécresse appears to many as the favorite, especially since she received the support of the three candidates eliminated in the first round, Xavier Bertrand, Michel Barnier and Philippe Juvin.

We certainly refuse in his camp to rejoice prematurely, recalling that no election is played in advance. Corn “I don’t see how she wouldn’t win, people are going to want to vote useful“, assures one of his supporters.

“It’s a new election that begins“, assured Eric Ciotti on Thursday, assuring:” I like difficult missions “.

In the first round, the deputy for Alpes-Maritimes gathered 25.6% of the vote against 25% for Valérie Précresse, ie less than 700 votes of difference.

Which, for political scientist Pascal Perrineau, also means that “74% of voters did not choose Eric Ciotti but a candidate with a Chiraquian profile“, by cumulating the scores of Pécresse, Bertrand, Barnier and Juvin.

In total, the team of Valérie Pécresse claimed the rallying of 170 parliamentarians on Thursday evening, including the LR president of the Senate Gérard Larcher, the boss of LR deputies Damien Abad, as well as several elected members of the close guard of the Barnier and Bertrand teams.

The public positions taken by some LR officials were little appreciated by Eric Ciotti: it is “an attitude contrary to the spirit of our group and our political family“, he lamented on Twitter.

In his camp, we want to believe that the match will be closer than announced. Eric Ciotti “addressed above all to the militants, it has the spring of the sincerity. No one owns the votes of members“, assures Stéphane Le Durulier, his campaign spokesperson.

The loyalty argument could thus transfer some of Michel Barnier’s voters to Eric Ciotti, and that of firmness convince some in Xavier Bertrand.

For Pascal Perrineau, the deputy of the Alpes-Maritimes will probably grab a few points, and could pass “25 to 39%“.

“Members are starting to tell themselves that they have a small chance to invite themselves to the second round and they wonder who can win“, which, according to the political scientist, would favor Valérie Pécresse because”for LR, it will be necessary to recover the voters who left with Emmanuel Macron“.

In her profession of faith for the second round, the president of Ile-de-France advocates “unity” and “gathering“to wear”a project of frank rupture and assumed right“.

For his part, Eric Ciotti promises to win “by bringing together the people of the right“, far from a”centrist positioning too close to macronism“.

Participation should remain strong in the second round, since it already reached 39.2% Friday noon, against 25.2% only at the same time of the first round.