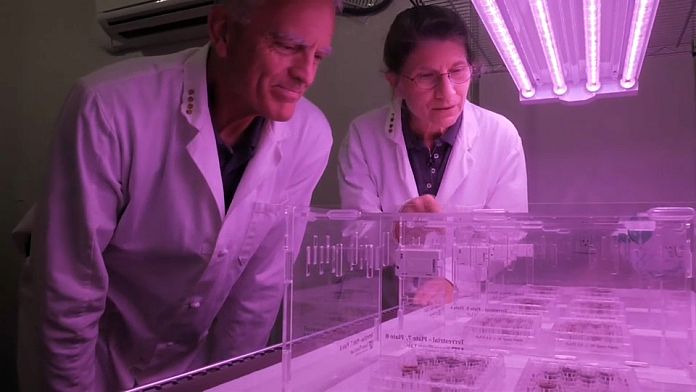 Will we ever be able to grow carrots on the moon? It is very likely, according to a study published on Thursday. For the first time, American researchers have succeeded in growing plants in samples of lunar soil.

“For us the first message is, “the cow! It is possible to grow plants on the lunar soil”. Apart from that, we learned that we still have things to know and improve if we want to start cultures“enthuses Robert Ferl, a scientist at the Institute of Food and Agricultural Sciences at the University of Florida.

Researchers at the University of Florida began their plantations a year ago: in each mini capsule, they placed watercress seeds in one gram of lunar soil, also called regolith. This same soil recovered in 1969 during the Apollo 11 mission by Neil Armstrong and his crew, as well as during missions 12 and 17. A nutrient solution was also added daily.

Seeds were simultaneously planted in soil from our Earth, and samples mimicking lunar and Martian soil, to serve as a comparison.

“During their first week of life, there was really no difference between the witnesses and the lunar plants. So there was nothing fundamentally toxic in thelunar regolith that would prevent plants from growing. All we have to do is figure out how to mitigate the negative effects“, says Anna-Lisa Paul, lead author of the study.

After a few days the researchers realized that the shoots planted in lunar soil grew more slowly, and with stunted roots. Results nevertheless considered encouraging, as explained by Stephen Elardo, geologist at the University of Florida: “It was the first step in what will hopefully be a very long, decades-long process of figuring this stuff out. And when we return to the Moon, to do so on the lunar surface.“

Being able to grow food on the moon would make it possible to envisage longer missions, and to reduce what the astronauts have to take on board with them in the capsules.

The study is timely for NASA, which is preparing to return to the moon within the next five years as part of the Artemis program.

47 billion euros in fossil fuels: the major French banks pinned down by a report