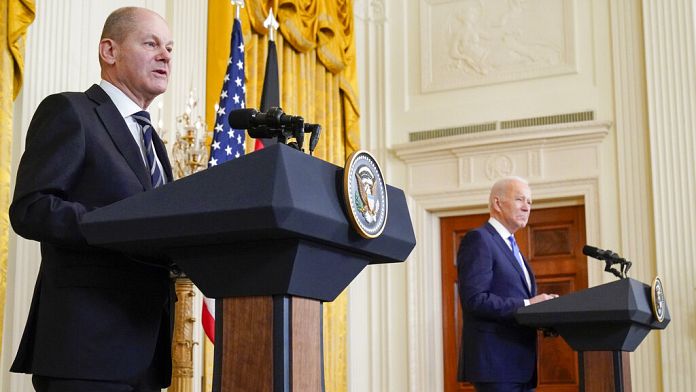 US President Joe Biden and German Chancellor Olaf Scholz touted their harmony on Monday in Washington in the crisis around Ukraine, but still failed to speak with the same voice on the controversial Nord Stream 2 gas pipeline.

“If Russia invades (Ukraine), that means tanks and troops crossing the border into Ukraine, again. Then there will be no more Nord Stream 2. We will end it.”said Joe Biden about this gas pipeline linking Russia to Germany, already built but which has not yet entered into operation.

The American president, questioned in this regard, did not specify how the United States could cut off this underwater infrastructure directly linking Russia to Germany, if Berlin objects.

“I assure you that we will get there”he only said.

At his side during a joint press conference, the German Chancellor, pressed with questions about Nord Stream 2, was not so explicit.

United States and Germany are “absolutely united” on the sanctions to be imposed on Russia if it ever attacked, and the two countries would take “the same measures”assured Olaf Scholz, taking care not to mention Nord Stream 2 by name.

He stated that in his opinion, one should not “not put on the table” from the outset all possible measures of retaliation.

The question of Nord Stream 2 has weighed on relations between Washington and Berlin for years, but it has taken on particular acuity with the crisis around Ukraine.

The United States has long argued that this infrastructure gives Moscow too much energy and strategic leverage.

Joe Biden was however convinced last year by former Chancellor Angela Merkel to suspend American sanctions which weighed on the project.

“Count on Each Other”

The American president nevertheless wanted to show his good understanding with Olaf Scholz on Monday.

Joe Biden assured that Germany and its leader had “all the confidence of the United States”at a time when the German position vis-à-vis Russia raises questions in Washington.

Olaf Scholz felt that the two nations could “count on each other”.

He repeated that Moscow would suffer “very, very high costs” in case of attack from Ukraine.

The Social Democratic Chancellor seems to irritate Americans both by its ambiguities around the gas pipeline, and by blocking arms deliveries to Ukraine.

Contradictory statements by German officials on the attitude to take towards Russian President Vladimir Putin have completed the sow confusion in Washington on the reliability of the first European economy, intimately linked to Russia on the gas and commercial level.

Berlin, however, has recently focused on giving pledges. Earlier Monday, the German Defense Minister announced the dispatch of 350 additional German soldiers to Lithuania as part of a NATO operation.

And he intends to play a role in the current diplomatic negotiations around Russia.

After French President Emmanuel Macron, it will indeed be the German Chancellor’s turn to meet Vladimir Putin in Moscow on February 15, after a visit to Kiev.