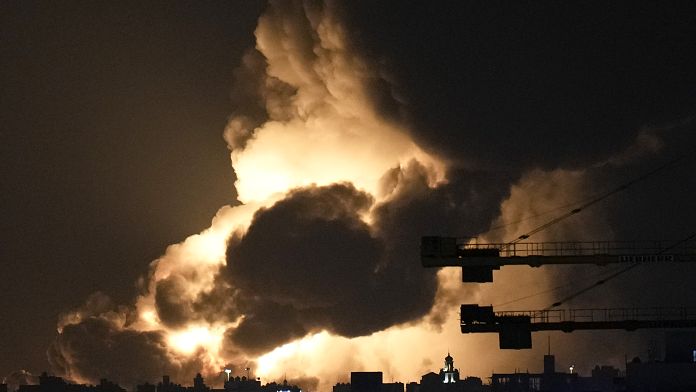 Yemeni Houthi rebels carried out a new series of attacks in Saudi Arabia on Friday, one of which caused a huge fire at an oil site in Jeddah near the Formula 1 circuit which hosts the Grand Prix.

These attacks come on the eve of the seventh anniversary of the intervention of the military coalition led by the kingdom in Yemen to support the Yemeni government against the Houthis, close to Iran. They caused no casualties according to Riyadh.

The rebels led 16 attacks in the South and in Jeddah (west) targeting various infrastructures, including a power plant, a water station and oil facilities, the coalition said in a statement. The most impressive took place in Jeddah against the tanks of the oil giant Aramco, causing a gigantic fire. “The fire was brought under control“, said the coalition spokesman, Turki al Malikiensuring that the incident would have no impact “on activities in Jeddah”.

It happened not far from the Formula 1 circuit where the Grand Prix free practice is currently being held, scheduled for Sunday. The Formula 1 championship promoter has already indicated that the race will continue “as planned”. A four-hour meeting between the drivers, the bosses of their teams and the main leaders of the championship was held in the evening, without an official announcement at its end.

The attacks, carried out with missiles and drones, were launched from the towns of sanaathe capital of Yemen in the hands of the insurgents, and Hodeidahalso in rebel zone.

They gave rise to coalition retaliatory fireannounced by the official Saudi agency SPA on the night of Friday to Saturday, “against sources of threat in Sanaa and Hodeidah“.”The military operation will continue until its objectives are achieved“, she added, quoting the coalition.

By targeting oil facilities, the Houthis are trying to “touch the nerve of the global economy“, asserted Turki al Maliki. Oil prices have risen sharply since Russia’s February 24 invasion of Ukraine disrupted global supplies, with Russia being hit by Western sanctions.

the Kingdom of Saudi Arabia, the world’s leading exporter of crude oil, had already warned on Monday of the risk of a drop in its oil production the day after several attacks claimed by the Houthis.

An official from the Saudi Ministry of Energy, quoted by the official SPA agency, again warned on Friday of the threat posed by these attacks “for the security of the world’s oil supply. __Saudi Arabia will not take responsibility for any shortage of oil supply in world markets“, added the Saudi official, accusing Iran of “continuing to supply drones and missiles” to the Houthis.

One of the attacks on Sunday forced Aramco to “temporarily” cut production and dip into inventory to compensate.

Western countries have been pressing since the beginning of the Ukrainian crisis organization of the petroleum exporting countries (OPEC), led by Saudi Arabiato increase production.

Give talks a chance?

The Gulf monarchy, however, remained deaf to these calls, faithful to its commitments to the OPEC + alliance, which includes Russia, the second largest exporter of crude oil in the world.

Seven years after the first strikes on March 26, 2015 in Yemen, the military intervention led by Riyadh has shown its limits on the ground and accentuated one of the worst humanitarian crises in the world. It made it possible to halt the advance of the Houthis in the south and the east, but not to dislodge them from the north of the country, especially from the capital Sanaa.

According to the UN, the conflict has caused the death of nearly 380,000 peopleincluding a majority of deaths related to hunger, disease and lack of drinking water.

the Gulf Cooperation Council (CCG), which brings together six Arab petro-monarchies and is dominated by Saudi Arabia, indicated in mid-March that it was ready to organize peace talks with the Houthis, but the latter refused to participate if they stood by. Riyadh. The coalition said Friday “show restraint” to give the talks a chance.

Plane crash in China: 24 hours later, among the 132 passengers no survivors have been found