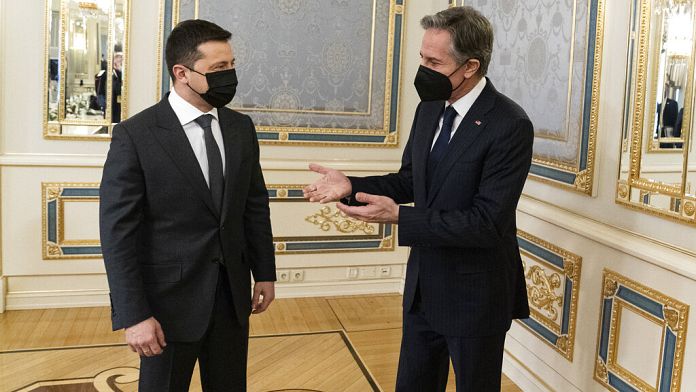 The US Secretary of State traveled to Kiev, Ukraine on Wednesday. Anthony Blinken toured Europe in an attempt to ease tensions between Russians and Westerners.

The head of American diplomacy appealed to the Russian president, asking him to choose “the peaceful way” in the Ukrainian crisis.

Ukrainian leaders fear a Russian military attack on their territory.

Through Antony Blinken, the United States reiterated its support for Ukraine.

“The Ukrainian people embarked on the path to democracy and to Europe in 1991, recalled Antony Blinken_. He defended this choice during the Maidan revolution in 2013. __And unfortunately, since then, you have faced relentless aggression from Moscow_”.

A compromise in Geneva?

Westerners are worried about the deployment of Russian soldiers on part of the eastern front of Europe, particularly around Ukraine.

Moscow denies any plans for an attack. But the Kremlin demands guarantees, in particular the commitment not to enlarge NATO. If Kiev joined the Atlantic Alliance, it would be seen as an affront by Russia.

A summit meeting between the Russian and American foreign ministers is scheduled for Friday in Geneva to try to find a compromise.