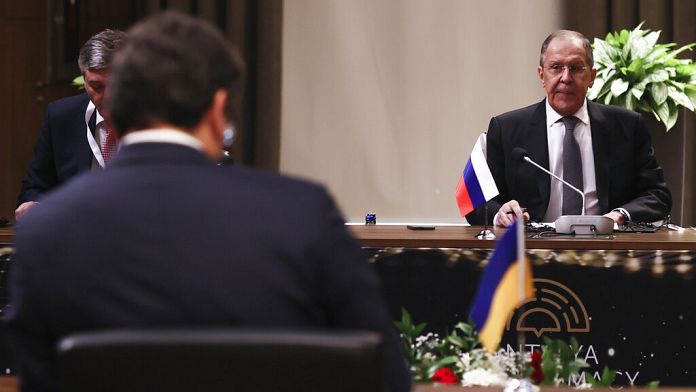 The heads of Russian and Ukrainian diplomacy failed on Thursday to agree in Turkey on a ceasefire in Ukraine during their first meeting since the beginning of the Russian invasion, the day after the bombing of a pediatric hospital in the besieged city of Mariupol which killed three people, including a young girl.

Russian Minister Sergei Lavrov and Ukrainian Dmytro Kuleba stuck to their guns during this meeting, the first at this level since February 24, under the auspices of their Turkish counterpart Mevlut Cavusoglu in Antalya (south), a popular seaside resort for Russian tourists.

“We have talked about a ceasefire but no progress has been made in this regard“, Mr. Kuleba told the press, adding, however, that he “hoped“to be able to continue the discussion with his counterpart.

“Ukraine will not surrender”

According to Mr. Kuleba, his Russian counterpart Sergei Lavrov assured him that Russia “will continue (its) aggression until we accept their demand to capitulate”.

“Today I heard that the ceasefire was linked by the Russian Federation to the fulfillment of President Putin’s demands on Ukraine“, he said. But “Ukraine has not surrendered, is not surrendering and will not surrender“, he hammered in front of the journalists.

For his part, Mr. Lavrov said that Russia wanted to continue the dialogue with Ukraine, but considered that the “Russian-Ukrainian format in Belarus“, which stands at a lower level of representation, had “no option“.

Three sessions of talks between Russian and Ukrainian negotiators have already taken place in Belarus, an allied country of Russia, since the start of the invasion, which have resulted in several local ceasefires and the opening of humanitarian corridors for evacuate civilians from besieged towns.

But Russia has repeatedly been accused of violating these agreements.

It also maintains a siege of major cities and a bombing campaign, like the one that hit a children’s hospital on Wednesday in Mariupol, a strategic port on the Sea of ​​​​Azov (southeast) besieged by the Russian forces.

Three people, including a girl, perished there, announced in a new report Thursday the town hall of Mariupol, which reported the day before 17 wounded. Separately, a fourth person was killed in a raid on Thursday morning.

The bombing of the hospital sparked a wave of international condemnation. The White House has denounced a use “barbaric“force against civilians, British Prime Minister Boris Johnson called the bombing “_immora_l” and Spanish Prime Minister Pedro Sanchez accused Russia of “war crimes“.

The bombardment occurred while women were giving birth in the hospital, which had just been re-equipped, a member of the military administration of the Donetsk region told AFP.

In Antalya, Sergei Lavrov claimed that the hospital served as a base for a nationalist battalion.

“This maternity ward has long since been taken over by the Azov battalion and other radicals, and all the women in childbirth, all the nurses and all the support staff have been thrown out.“, he assured.

The nine-day siege of Mariupol has already claimed 1,207 lives, the town hall announced. Several eastern neighborhoods of the city have reportedly been taken over by pro-Russian Ukrainian separatist forces, according to the Russian Defense Ministry.

According to the Ukrainian General Staff, the Russian forces are continuing their “offensive operation“to encircle Kiev, while attacking on other fronts the cities of Izium, Petrovske, Hrouchouvakha, Sumy, Okhtyrka, or in the regions of Donetsk and Zaparojie.

To the northeast, plumes of smoke rose above Skybyn, less than a kilometer from Kiev, an AFP journalist noted. The road was cut and the soldiers warned that artillery fire could start at any time.

According to Vadym Denysenko, spokesman for the Ukrainian Interior Ministry, Ukrainian forces destroyed five Russian tanks in a counter-offensive in the western outskirts of Kiev.

Two women and a 13-year-old boy were killed in a night bombardment in Velyka Pysarivka, said the head of the military administration of the region of Sumy (northeast), Dmytro Jivitsky. In the region of Zhytomyr (west of Kiev), seven people were killed in the night, including five in the firing of a missile on a road, according to the national police.

Humanitarian corridors were opened again on Thursday to allow the evacuation of civilians from areas hard hit by the fighting, which forced the inhabitants of several large cities to remain sometimes for days hidden in cellars.

A long convoy of buses was heading in the morning towards the northwest of Kiev, where the authorities are organizing the evacuation of people stranded in Irpin and Boutcha.

At least 35,000 civilians were evacuated on Wednesday from Sumy, Enerhodar and areas near the capital Kiev, President Zelensky announced on Wednesday evening.

The Russian Ministry of Defense for its part accused Thursday the United States of having financed a biological weapons program in Ukraine, claiming to have found evidence to this effect in Ukrainian laboratories.

“Those who are arming Ukraine must of course understand that they will bear the responsibility for their actions“, he declared to the press, denouncing in particular the deliveries of portable surface-to-air missiles.

On the European Union side, the Heads of State and Government of the 27 Member States will discuss Thursday and Friday in Versailles, near Paris, the economic and security challenges posed by the war in Ukraine in Europe.

After two weeks of conflict, Western sanctions continue to rain down on Russia and are increasingly having their effects felt in the country, with which a growing number of companies are cutting all or part of their ties.

Mines in the Black Sea: on alert, the Romanian Navy multiplies simulation exercises

France: a sarcophagus discovered under the slab of Notre-Dame de Paris

To follow live: ninth day of war in Ukraine

News of the day | February 4 – Morning