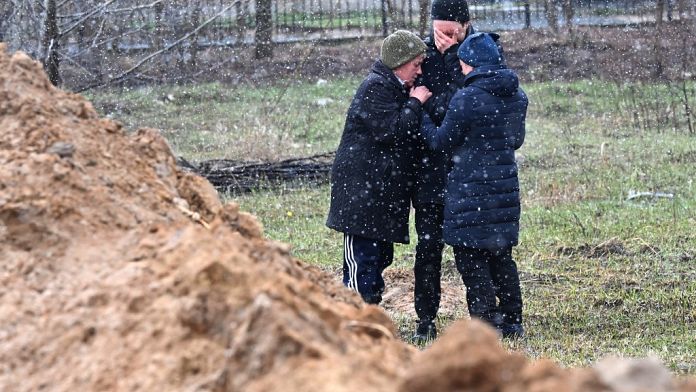 Ukrainian President Volodymyr Zelensky on Sunday accused Russia of committing “genocide” in Ukraine to eliminate “the whole nation”, after the discovery of numerous bodies in Boutcha, a city northwest of Kyiv, following the departure of forces Russians.

“I want all the leaders of the Russian Federation to see how their orders are carried out. These kind of orders (…). And they have a common responsibility. For these murders, for these tortures, for the arms torn off by explosives (…) For the bullets fired in the back of the neck”Mr. Zelensky said on Sunday evening, adding that a “special mechanism” would be created to investigate all Russian “crimes”.

The bodies of 410 civilians have so far been found in the territories of the kyiv region recently recaptured from Russian troops, Ukraine’s Prosecutor General Iryna Venediktova announced on Sunday.

The Russian Ministry of Defense assured Sunday that its forces had not killed civilians in Boutcha. “During the period when this locality was under the control of the Russian armed forces, not a single local resident suffered from violent actions”the ministry said.

He claimed that the images of corpses on the streets of the city were “a new production of the kyiv regime for the Western media”.

Russia is asking for a meeting of the UN Security Council to decide on the “hateful provocations” it says have been committed by Ukraine.

“In light of the hateful provocations of the Ukrainian radicals in Boutcha, Russia has requested a meeting of the UN Security Council on Monday April 4”tweeted Russia’s Deputy Ambassador to the United Nations Dimitri Polianski.

The United States and NATO expressed their horror on Sunday while German Chancellor Olaf Scholz called for new sanctions against Russia. “We will decide on new measures between Allies in the coming days”assured the latter.

The pope is “available”

“I am available,” declared the pope, at the end of a whirlwind visit to Malta. “The Holy See is doing everything possible” to facilitate a settlement of the conflict, he assured, confirming that a trip to kyiv was one of the options but “I don’t know if it can take place, or if it would be useful”.

Francis also said that a meeting with the Russian Orthodox Patriarch Kirill – who supports Vladimir Putin and justified the Russian military intervention at the end of February – was still “under study”. “We are working on it and we are thinking of the Middle East to do it“, did he declare.

During an open-air mass in front of at least 12,000 people in the capital Valletta on Sunday morning, he denounced “the sacrilegious war” unleashed by Russia in a “martyred Ukraine”.

A series of explosions rocked Odessa, Ukraine’s main port, on the Black Sea in the south-west of the country on Sunday morning. They did not cause any casualties, according to the Ukrainian army.

Russia said it carried out strikes by “high precision sea and land missiles” who, according to her, “destroyed a refinery and three fuel and lubricant storage sites” near Odessa.

In addition, one person was killed and fourteen injured in a Russian strike in Mykolaiv, a lock town on the road to Odessa, according to the governor of the region.

In eastern Ukraine, a Russian strike on a hospital in Rubizhne left one dead and three injured, according to the governor of the region.

At least seven people were killed and 34 injured in a Russian strike on Sunday on a residential area in Kharkiv, a major city in northeastern Ukraine, local prosecutors said.

In Dergatchi, very close to Kharkiv, “at least three people died and seven were injured” also in the bombing of a residential area, said its mayor.

The chief Russian negotiator in the peace talks with Ukraine, Vladimir Medinski, on Sunday welcomed a “more realistic” position according to him from kyiv, ready under conditions to accept a neutral status for the country, demanded by Moscow.

“The Ukrainian side has taken a more realistic approach to issues related to Ukraine’s neutral and nuclear-free status,” Medinski said.

Ukrainian chief negotiator David Arakhamia said on Saturday that Moscow had “orally” accepted all Ukrainian positions, “except with regard to the Crimea issue”.