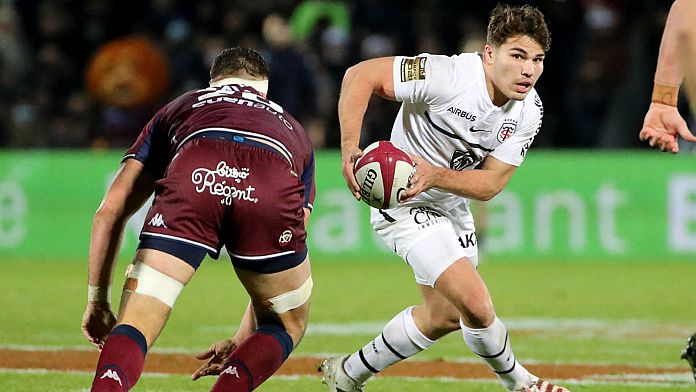 Cock-a-doodle Doo ! The rooster, the emblem of the French rugby team, can sing loud and clear! Antoine Dupont, captain of the French XV, was named best world player of the year 2021, announced on Friday World Rugby, the international body that governs the world of the oval. This award was awarded to him following a process combining public voting and a jury of experts.

“It’s hard to realize. There is of course a lot of joy and pride, a lot of feelings and emotions that mix together “, he reacted in a video published by World Rugby, adding that “it’s weird to see his name on this list, it almost feels like we’re doing it. After that, you have to do everything to be able to claim it again and continue to perform well all the time.“, confided Antoine Dupont.

The news was greeted by his club in Toulouse, where Antoine Dupont plays, as with the Blues, as scrum half.

It is a consecration for the young player of 25 years who won everything this year with the Stade Toulousain. The Brennus shield, the award given to the victorious Top 14 team, the French rugby union championship, and the Champions Cup, the European rugby cup, have indeed lined his trophy cabinet.

At the international level, Dupont and his band distinguished themselves last November by inflicting a drop on the All Blacks. The France team, thanks to a superb collective performance, indeed beat New Zealand – what had not happened since 2009, the Blues were on a series of 14 consecutive losses against the ogre kiwi – on the score of 40 to 25. With this victory, the XV of France can nourish hopes for the next tournament of the VI Nations and especially for “its” World Cup which will be played at home in 2023.

Dupont is the third French to obtain this distinction launched in 2001 by World Rugby, after the former scrum half and current coach of the France team Fabien Galthié, in 2002, and the former third row Thierry Dusautoir, in 2011.

He succeeds the South African third row Pieter-Steph Du Toit, crowned in 2019, because the title of world player of the year was not awarded in 2020 due to the Covid-19 pandemic.

Promoted captain of the Blues for the autumn tests, Dupont is the only Frenchman to appear in the world type team of the year, alongside five South Africans and three New Zealanders.

For women, the title of world player of the year was awarded to England’s Zoe Aldcroft. Two Frenchwomen had been appointed: winger or rear Caroline Boujard and scrum half Laure Sansus.

Tonga: aid slowed due to volcanic ash covering the country

Festival of Lights 2021: aficionados at the rendezvous for the opening