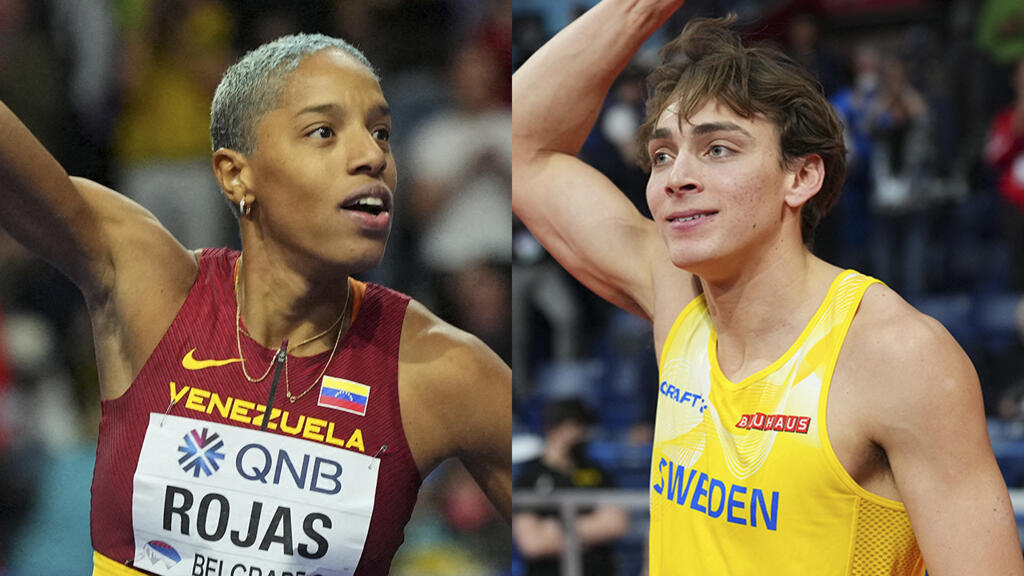 At the World Indoor Athletics Championships on Sunday in Belgrade, Venezuelan Yulimar Rojas and Sweden’s Armand Duplantis set new world records in their discipline, the triple jump and the pole vault. Both push the limits to reach distances and heights that we dared not imagine.

A bit like when the Jamaican Usain Bolt crushed the world sprint, pole vaulters and triple jumpers now seem doomed to only be able to claim the silver medal, at best. The coveted gold is out of reach.

In the men’s pole vault, Armand Duplantis has been on another planet for two years. And for the ladies, in the triple jump, Yulimar Rojas has been dictating the law for five years now. The competition can only watch these two monsters redefine the standards of their discipline.

Perfect illustration again on Sunday March 20 during the Worlds ofAthletics indoors in Belgrade, Serbia. Yulimar Rojas and Armand Duplantis were not bothered, even for a moment, by their opponents.

In Tokyo, the 1er August 2021, in the final of Olympic Games, Yulimar Rojas had already struck a blow by breaking the previous world record in his discipline, 15.50m, set at the 1995 Worlds by Ukrainian Inessa Kravets. The Venezuelan jumped 15.67m.

The “Queen of the triple jump” did even better in Belgrade. Almost assured of the title from his first try, Yulimar Rojas launched himself into the race for a new world record. Mission accomplished on his sixth and last attempt: 15.74 m. Looking at her, it seems almost easy as the slender athlete – 1.92 m, 72 kilos – masters her art. After her coronation, she also let go that she had come to Serbia “to have fun”.


Olympic champion, double outdoor world champion, triple indoor world champion, world record holder… Yulimar Rojas leaves no crumbs. On Sunday, her runner-up, the Ukrainian Maryna Bekh-Romanchuk, finished a meter behind her. During the last Olympics, the Portuguese Patricia Mamona fought hard to beat the national record by a wide margin… but still finished 66 centimeters behind the gold medalist. The chasm between the boss and the rest of the circuit is abyssal.

At 26, the Venezuelan defies the laws of physics by proclaiming her goal loud and clear: to become the first woman to reach 16 meters. Listening to him, it’s only a matter of time: “My motto is ‘nothing is impossible’. I’ll get there. I was born to jump 16 meters and that’s what I want to inspire others. I know I have 16 meters in my legs.” And it may not be over, because Yulimar Rojas also has high ambitions in the long jump. On June 13, 2021, without preparation, she jumped 6.88m, a new national record. Then she reached 7.27m, a crazy performance but invalidated by a slightly too strong wind. Beware of this unlimited appetite.

Duplantis hovers at 6.20 m while waiting for better

As a teenager, he was already a phenomenon. Armand Duplantis was quick to confirm all the potential seen when he shone in the cadets and juniors. European champion in 2018 at only 18 years old, vice-champion of the outdoor world in 2019, the Swede was programmed to dominate the pole vault. He did not fail: since 2020, the pole vaulter has hovered well above all his opponents.

In Belgrade, “Mondo” once again flew over the competition. Silver medalist, Brazilian Thiago Braz da Silva missed three jumps before clearing 5.95m, then failing at 6.05m. During this time, Armand Duplantis knew no failure up to 6.05 m. Assured of the title, he therefore had plenty of time, like Yulimar Rojas earlier, to aim for a new world record: 6.20 m, or one centimeter above the reference bar crossed by himself there is … only two weeks. And after two misses, the Swede erased this bar.

The domination of Armand Duplantis recalls that of Sergei Bubka in the 1980s and 1990s. The Ukrainian had broken the world record 35 times to take it from 5.85m in 1984 to 6.15m in 1994. It was then necessary to wait almost 20 years to see Renaud Lavillenie, model and great friend of Armand Duplantissurpassing Sergei Bubka by crossing 6.16 Mr. The Frenchman only kept this record for six years. Maître Duplantis snatched it from him in 2020, the year of his advent, to take it to new heights.

European indoor champion, Olympic champion and now indoor world champion, the Swede has already broke the record four times : 6.17 m then 6.18 m in February 2020, and therefore 6.19 m and 6.20 m in March 2022. It makes you wonder how far it will fly. He sets himself no limits, as he confided after his title in Belgrade: “I want to push back the barriers. I want to be a guy who jumps high in the big competitions. I have now jumped enough over 6m to know that it’s possible to break records anytime. I have a good idea of ​​what I need to stay on top.” His opponents have reason to be resigned, because “Mondo” is only 22 years old. His reign is set to last.

the XV of France wins its first match against Italy