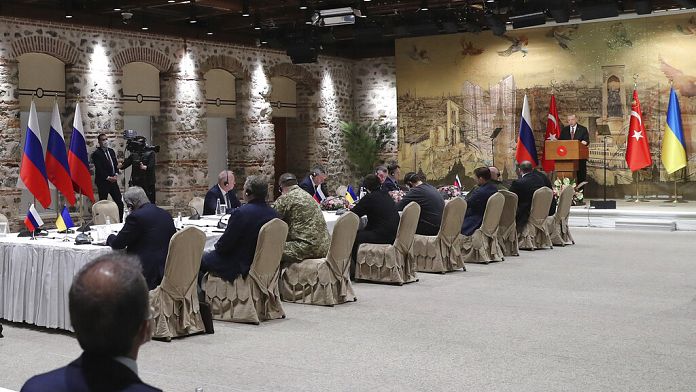 Arrived Monday in Istanbul for a first session of face-to-face talks since March 10, Russian and Ukrainian negotiators began their discussions shortly after 7:30 GMT, according to the official Turkish agency Anadolu. The discussions are held in the Dolmabahçe Palace in Istanbul, the last residence of the sultans on the Bosphorus, where the Turkish presidency has offices.

“Both sides have legitimate concerns“, said the Turkish president Recep Tayyip Erdogan by welcoming the delegations, calling on them to “put an end to this tragedy”which has already forced nearly 3.9 million Ukrainians to flee their country, according to the UN.

Russia’s chief negotiator Vladimir Medinsky told Russian agencies he hoped to “make a statement“at the end of the talks, “in few hours“.

At midday, his Ukrainian counterpart Mykhaïlo Podoliak summarized on Twitter the conditions imposed by kyiv: “Unconditional security guarantees for Ukraine, ceasefire, effective decisions on humanitarian corridors and humanitarian convoys, respect by the parties for the laws and customs of war“, qualifying as “difficult” the negotiations.

Monday evening, the head of Ukrainian diplomacy Dmytro Kouleba had stressed that “people, territory and sovereignty” they were not “not negotiable“.

The Russian Oligarch Roman Abramovichtargeted by European sanctions and which is trying to mediate between Moscow and kyiv, was present in the negotiating room, according to a photo released by the Turkish presidency.

After a meeting in the Ukrainian capital in early March, the billionaire showed symptoms that suggest possible poisoning, a source familiar with the matter told AFP on Monday, confirming information from the Wall Street Journal. According to the newspaper, some suspect the hardliners in Moscow who would like to sabotage the talks.

Kremlin spokesman Dmitry Peskov confirmed that the oligarch was playing the role of mediator and brushed off the poisoning charges, saying they did “part of information warfare“.

The last face-to-face negotiation session, at the level of foreign ministers in Antalya, Turkey, had not led to any progress. The discussions had since continued by videoconference.

One of the important points of the discussions relates to “security guarantees and neutrality, the nuclear-free status of our state“Ukrainian President Volodymyr Zelensky told Russian media on Sunday, stressing that any agreement reached should then be approved by referendum. The Ukrainian Constitution, however, prohibits the holding of a referendum in time of war.

As for the battles on the ground, the Russian Minister of Defense estimated that “on the whole, the objectives of the first stage (of the offensive launched on February 24) were achieved“.”The military potential of the Armed Forces of Ukraine has been significantly reduced, which makes it possible to focus attention and efforts on the main goal: the liberation of Donbass“, said Sergei Shoigu.

The Ukrainian authorities announced on Monday that they had “released“Irpin, scene of fierce fighting 20 km northwest of kyiv.”The occupants are pushed back from Irpin, pushed back from kyiv. However, it is too early to talk about security in this part of our region. The fighting continues. Russian troops control northern Kyiv region, have resources and manpower“, Mr. Zelensky said in a video Monday evening.

On Tuesday, the situation seemed relatively calm in this locality, where we heard sporadic gunfire, however, according to AFP journalists. Soldiers nevertheless blocked journalists’ access to the destroyed bridge leading into the city, explaining that the Ukrainian forces were still “to clean” The area.

“In my opinion, about 70 to 80% of the city is liberated, the outer limits are still in the hands” Russians, told AFP Roman Kovalevskiï, 48, a resident of the city who left there on a bicycle with empty gasoline cans to go to supply kyiv.

Around Kharkiv, Ukraine’s second city, close to the Russian border, Russian mercenaries from the Wagner group have been deployed, according to the British Ministry of Defence, which estimates that more than a thousand of these men could be brought to fight in the country.

In the south, a Russian strike hit the regional administration building in Mykolaiv, a city near Odessa on Tuesday morning, which has experienced a respite from the bombardments in recent days, said Vitaly Kim, the governor of this region on Facebook.

At least seven people are dead and 22 others injured, according to Ukrainian President Volodymyr Zelensky. AFP journalists saw rescuers pull two bodies from the rubble, and the building was gutted to its full height.

“I was having my breakfast at home“, told AFP Donald, a 69-year-old Canadian retiree living in the city. “I heard a whistle, then a boom and my windows rattled“, he recounted.