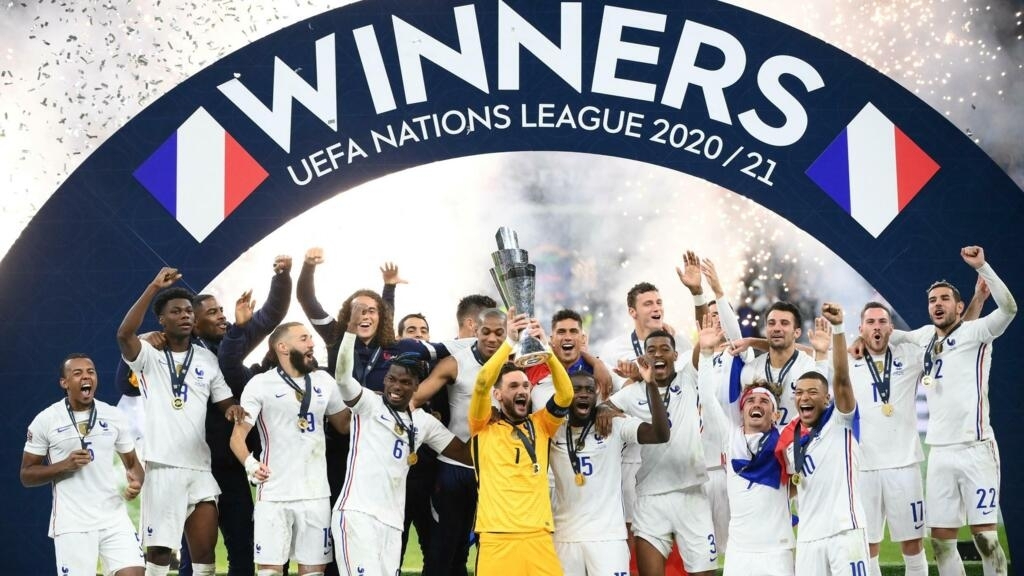 France defeated Spain 2-1 in the Nations League final on Sunday, thanks to goals from Karim Benzema and Kylian Mbappé.

It is neither the Euro nor the World Cup but it is still an additional trophy in the bag of the Blues. In the final of the League of Nations, the France beat theSpain (2-1) Sunday 10 October at the San Siro stadium in Milan during the final of the competition. Karim Benzema and Kylian Mbappé responded to Mikel Oyarzabal’s opener.

Thirteen months before the World Cup in Qatar (21 November-18 December 2022), for which they are almost qualified, the reigning world champions have garnished their trophy cabinet a little more by taking over from Portugal of Cristiano Ronaldo, crowned in 2019.

Above all, they tamed a falling “Roja” of the Italian European champions, Wednesday in the semi-final, displaying a strength of character to any test, in the absence of a total mastery. After Thursday’s stunning 3-2 win over Belgium, the first nation in the Fifa rankings, Les Bleus made their mark and laid bricks for the future, despite the still smoldering ruins of the failed Euro this summer.

First half without opportunity

The Nations League does not have the prestige of a major tournament, but the high plateau of the final phase gives Sunday’s title an intoxicating flavor for Les Bleus against one of the most prominent teams of the moment, semi-finalist of the last Euro, the game licked like that of its glorious elders, and seriously rejuvenated under the impetus of Luis Enrique.

In the first half, the long-awaited shock resulted in a peak… boredom, without the opportunity of a goal, or even action likely to enthuse the 31,500 spectators recorded at the San Siro, of which the loudest and demonstrative were those who came to cheer the “Roja”.

The “olé, olé” fallen from the Spanish stands accompanied the passing game of their favorites, but Hugo Lloris did not shake much. The only chills in the French camp came from an elbow used in its surface by Jules Koundé (31e), but the use of video assistance did not result in punishment.

Despite this, the tricolor defense did not sweat serenity. Ferran Torres, author of a double on Wednesday, gave the turn to the rearguard of the French and in the first place to Theo Hernandez, left “piston” often misplaced, overtaken in the race and sometimes forced to speak his physical to foil the opposing attacks.

“Forced and forced to defend”, as Didier Deschamps explained on M6 at the break, the Blues had the misfortune to lose before half-time their defensive rock Raphaël Varane, injured his right thigh and forced to give way to Dayot Upamecano, more seen for a year.

Deprived of balls, the French forwards watched the proceedings unfold without them for a long time, until the match suddenly fizzled out on the hour mark.

Aurélien Tchouaméni, starting in the absence of Adrien Rabiot (tested positive for Covid-19), started an offensive from the French camp by relying on Pogba, Kylian Mbappé and Karim Benzema combined until Theo Hernandez, whose recovery rattled the Spanish crossbar (64e).

A Benzema gem turns the situation around

In the aftermath, the “Roja” rushed to the goal of Lloris. Captain Sergio Busquets made a deep pass to Mikel Oyarzabal who, in the duel, played Upamecano (64e, 0-1).

The Blues could have been sounded, but Benzema gave them the smile of a sublime shot curled on a service of Mbappé (66e, 1-1). As in the match against Belgium, where the French were 2-0 up at half-time, the revolt and the reduction in the score came from the Madrid man, now credited with six goals since his surprise return in June.

And as against the Red Devils, the second goal was signed Mbappé. The Paris Saint-Germain striker, who came to the selection escorted by doubts, benefited from a pass from Theo Hernandez to deceive Unai Simon with a hook before making the nets shudder (80e, 2-1).

The French then shook on their bases, but Lloris turned into an impassable wall with two decisive saves (88e, 90e+4). Like a world champion!

Relive the encounter with our liveblog :

Postponement or cancellation of the CAN: what we know