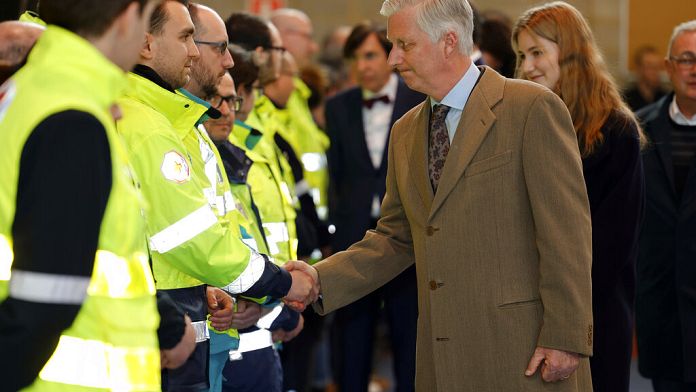 He was driving too fast and could not avoid the impact with _”a human wall” _: the driver who drove into a crowd gathered in the early morning for a carnival in Belgium on Sunday was imprisoned on Tuesday two days after the tragedy which killed six and injured 39.

Paolo F., 34, was imprisoned after being charged with “manslaughter” and “unintentional blows and injuries”announced the parquet floor of Mons (south) during a press conference.

His passenger, his cousin Antonino F., 32, with whom he was returning from a nightclub at the time of the events, was released on conditions after his indictment for “no assistance to the person in danger”.

In particular, he is forbidden to come into contact with Paolo or relatives of the victims.

The accident happened shortly before 5:00 a.m. on Sunday. Strépy-Bracquegniesa section of the commune of La Louvière in French-speaking Belgium, when a powerful BMW hit a group walking on the roadway, for the “pickup” at the homes of people in costume, before a carnival parade.

The impact was so violent that a victim pierced the windshield and landed “in the cockpit”, according to the prosecution. The driver, “in a state of shock”did not stop until several hundred meters further on.

The toll left behind is heavy: six dead and 39 injured, several of whom were still being treated in hospital 48 hours later. On Sunday, the authorities had reported ten people seriously injured among the injured.

In the midst of the return of pre-Easter carnivals, after a two-year hiatus due to the coronavirus pandemic, this drama has upset Belgium and reignited the debate on the supposed laxity of the authorities with regard to speeders.

“Screams and bangs on the car”

The driver had already been deprived of a license in the past. He boasted of being a speed lover behind the wheel, to the point of staging himself on social networks.

Before the investigating judge, on the night of Monday to Tuesday, he admitted that he was driving at excessive speed on Sunday morning. He evaluated it at 90 km / h in an area limited to 50, said the prosecution.

A time mentioned, the hypothesis of the absence of braking against the group of revelers has however been denied.

“A first analysis of the CCTV images shows that the rear lights of the vehicle light up, which indicates that there has been braking”told AFP Damien Verheyen, spokesman for the prosecution.

For his part, Frank Discepoli, the driver’s lawyer, explained that the latter had suddenly found himself faced with “a human wall” while he was talking, “return” towards his passenger, on a road taken daily for his job as a delivery man. The two cousins ​​are from La Louvière.

“In a few seconds, he is faced with a tragedy, the windshield explodes, he himself is covered in blood. He sees nothing, hears screams, blows on his vehicle… He never imagined that time he found himself in a carnival”, declared Me Discepoli on RTBF radio.

“He totally recognizes his recklessness”corn “we are in a completely involuntary setting, it is purely accidental”insisted the lawyer, while the investigation had been opened on Sunday for “murders”suggesting a deliberate act.

The driver had been drinking, but the breathalyzer showed only a slight overshoot of the authorized limit: “0.29 mg per liter of exhaled air instead of 0.22”, according to Mr. Verheyen. He also underwent a saliva test which did not reveal any drug use, but blood tests are still in progress.

Manslaughter in Belgium can be worth up to five years in prison. But the prosecution did not rule out that the qualification could still evolve during the investigation.

“Putin is a terrorist who takes our people hostage”, says a Ukrainian MP