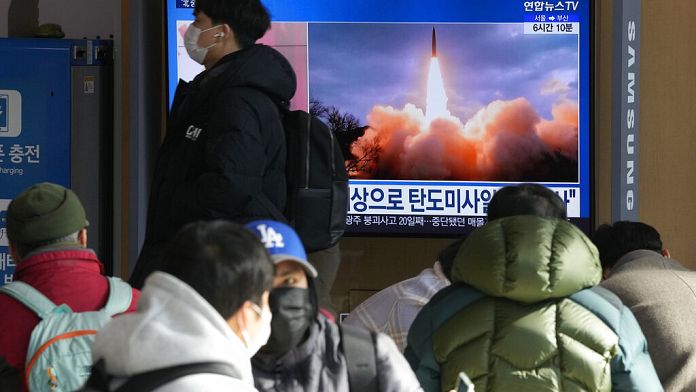 North Korea launched its most powerful missile since 2017 on Sunday, according to Seoul, which estimates that Pyongyang could soon carry out its threat to resume its nuclear or intercontinental ballistic missile tests.

This weapons test is the seventh conducted by the Pyongyang regime since the beginning of the year.

The last time North Korea fired so many shots in such a short time was in 2019, after negotiations between its leader Kim Jong Un and then-US President Donald Trump broke down.

South Korea warned on Sunday that the North was following “a similar path” to that of 2017, when tensions were at their height on the Korean peninsula.

Pyongyang “is close to breaking the moratorium” self-imposed on nuclear and intercontinental ballistic missile tests, judged the South Korean president Moon Jae-in in a press release.

The South Korean Joint Chiefs of Staff indicated that, at dawn on Sunday, “detected an intermediate-range ballistic missile fired at a high angle to the east”. Firing at a high angle means that the missile does not reach its maximum range.

The missile was fired from the northern province of Jagang, from where North Korea has launched what it claims are hypersonic missiles from in recent months.

It reached a maximum altitude of 2,000 km and traveled about 800 km in 30 minutes before falling into the Sea of ​​Japan, the general staff said.

The North Korean regime threatened on January 20 to resume nuclear or missile tests, saying it was politically compelled to do so. “hostile” of the United States towards him.

Since the inauguration of President Joe Biden in January 2021, Pyongyang has rejected the various dialogue proposals made by Washington. And Kim Jong Un reaffirmed in December that his priority was to modernize the country’s arsenal.

These North Korean trials come at a delicate time for the region: China, the only major ally of the North Korean regime, is hosting the Winter Olympics in February and South Korea is holding a presidential election in March.

Pyongyang prepares to celebrate the 80th anniversary of the birth of the father of Kimthe deceased Kim Jong Ilin February, then the 110th birthday of his grandfather, Kim Il Sungthe country’s founding leader, in April.

The multiplication of weapons tests also comes at a time when the North Korean economy is brought to its knees by international sanctions and by almost two years of border closures in the name of the fight against Covid-19.

“Kim’s regime listens to what is said outside about its internal weakness”says Leif Easley, a professor at Ewha University. “So he wants to remind Washington and Seoul that any attempt to overthrow him would be far too costly.”.

There is no chance of a peace agreement or an immediate ceasefire in Ukraine, says the UN