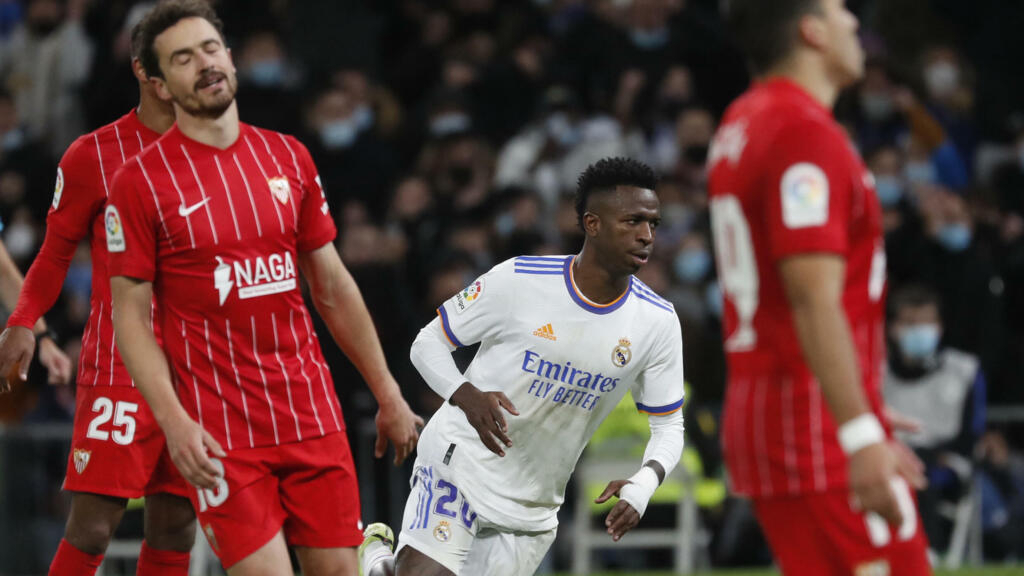 Like Neymar injured, PSG tamed Saint-Étienne in pain (3-1) on Sunday for Sergio Ramos’ debut in the French Championship. For its part, Real, carried by Vinicius and Benzema dominated Sevilla (2-1).

Mixed weekend for Paris SG: the untouchable leader of L1 won 3-1 in numerical superiority against Saint-Étienne, with a hat-trick of assists from Messi and the Parisian first steps of rookie Ramos. Something to bounce back from the recent European underperformance against Manchester City (2-1).

But Neymar’s injury darkens the picture. The Brazilian, victim of an impressive twist of the left ankle after an opponent’s tackle, screamed in pain before going out on a stretcher and in tears. He left the stadium on crutches and it will be necessary to see how long he is unavailable.

For its part, Marseille carried out a good operation by beating Troyes 1-0 on Sunday at home. With this success, OM came back to Nice at the 3e place, with one less match to play, the one stopped after only five minutes eight days ago in Lyon when Dimitri Payet was hit in the face by a water bottle coming from the stands.

Opposed to Sevilla FC at the end of the 15e La Liga day, the team led by Carlo Ancelotti won 2 goals to 1. Rafa Mir had nevertheless opened the scoring for Sevilla FC in the 12the minute of play. Karim Benzema, one of the favorites in Ballon d’Or trophy, equalized at the half-hour mark, scoring his 11e goal of the season in the Spanish league. With a superb sequence, Vinicius Junior offered the victory to his team in the 87e minute.

The Madrilenians are doing an excellent operation by taking 4 points ahead of Atletico Madrid despite the great success of the Colchoneros against Cadiz (4-1). A victory that owes a lot to the club’s offensive armada led by Diego Simeone, with goals signed Thomas Lemar and Antoine Griezmann.

In England, Chelsea saw their pursuers Manchester City and Liverpool come closer after failing to find a solution at home against Manchester United (1-1) on Sunday in the 13e Premier League day.

After their draw in Liverpool (1-1) at the end of August and their loss to Manchester City (1-0) at the end of September, the Blues have not yet managed to beat one of the three teams that had finished on the podium. last season.

They remain leaders with 30 points, but see the threats from Manchester City (29 points after their 2-1 victory over West Ham) and Liverpool (28 points after beating Southampton 4-0 on Saturday) become clearer.

After two consecutive wins, Juventus Turin fell at home against Atalanta Bergamo (0-1) in the 14e Serie A day and remains stuck in an eighth place unworthy of its rank.

No problem, however, for Naples, who took the lead in the Italian Championship alone by dominating Lazio Rome 4-0 at the Diego-Maradona stadium, where a second statue of the Argentine legend was inaugurated on Sunday at the end of the 14e daytime.

The “Napoli” now have three points ahead of AC Milan, co-leader before the day, beaten on home soil by Sassuolo at the start of the afternoon (3-1).

Bayern suffered on Saturday to beat the penultimate Bielefeld (1-0), but this narrow victory allows them to stay at the top of the Bundesliga with a point ahead of Dortmund, a week away from the highly anticipated “Klassiker” .

While the defending champions will move as the leader to challenge Borussia, winner Saturday (3-1) in Wolfsburg, but their current form does not necessarily make them favorites.

Finally, bad luck for Leipzig. Already eliminated in the Champions League, the RB collapsed at home against Leverkusen (3-1), who took the opportunity to take third place after 13 days.

Egan Bernal, winner of the Tour de France 2019, operated after a serious accident

Basketball – NBA: These revelations on the tensions among the Lakers!