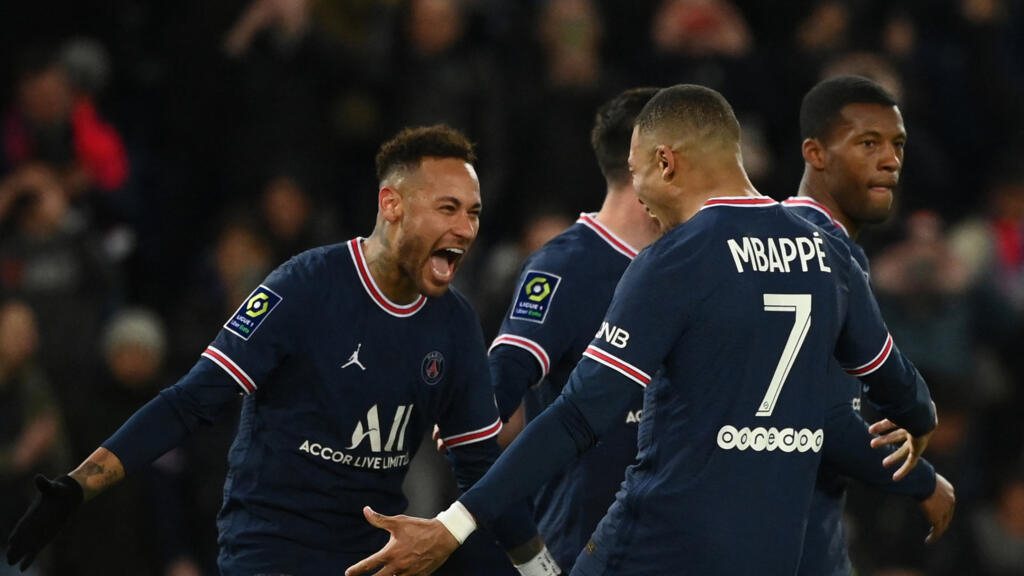 After their rout in Monaco (3-0), Paris SG pulled themselves together on Sunday evening, dominating Lorient (5-1) with a sparkling Kylian Mbappé at the Parc des Princes. In a crucial match, FC Barcelona also won at home against Sevilla FC (1-0) and moved up to second place in La Liga.

After his rout against Monaco (3-0) and his elimination from the Champions League, PSG showed, Sunday, April 3, a better face by beating Lorent dryly (5-1). A great Kylian Mbappe allowed the capital club to redeem itself. To his two goals (28th, 67th), the Parisian star added three offerings, two for Neymar (12th, 90th) and a magnificent for Lionel Messi (73rd) on an action where he did absolutely everything. PSG retains a twelve-point lead over Marseille (2nd) and now has fifteen over Rennes (3rd).

OM, stunning in Saint-Etienne (4-2), secured their second place and distanced their competitors Rennes and Nice, themselves threatened by the success of Strasbourg, fourth in Ligue 1 after their 1-0 victory against Lens . At La Meinau, the Strasbourg residents made the difference with a penalty from Ludovic Ajorque (67th, 1-0), who had not scored for almost three months. With this second defeat in a month, Lens slips in the standings to a tenth place far from its European ambitions. Nantes, Lille and Monaco are in front, but also Lyon who won late against Angers (3-2), at home, with a decisive goal from the young Brazilian Tetê in the 80th minute, two minutes after his debut in the shirt. Lyons.

Eight days from the shock at the Etihad, liverpool issued a warning to Manchester City by temporarily robbing him of his seat as leader, to launch a crucial month of April for him. Briefly at the top of the standings after beating Watford (2-0), the Reds saw Manchester City come back in front on Saturday by winning at Burnley (2-0). Under pressure, the defending champion, Manchester City was quick to regain his property. At the 19th, Burnley, the Citizens recorded a 10th success in a row against this opponent, on an aggregate score of 34 to 1, without getting too tired before receiving Atlético Madrid, Tuesday, in C1.

Laborious for 40 minutes and then brilliant, Tottenham for his part temporarily seized 4th qualifying place for the Champions League by crushing Newcastle (5-1). With 54 points, he leads on goal difference Arsenal, who will play Monday at Crystal Palace, and who have two games less, confirming their claims for the end of the season. Before receiving Lyon on Thursday in the quarter-final first leg of the Europa League, West Ham for its part preserved its European ambitions against Everton, to whom nothing succeeded (2-1). With 51 points, the Hammers advanced to 6th qualifying place for the Europa League Conference, but three lengths behind Tottenham and Arsenal.

FC Barcelona dominated Sevilla FC (1-0) on Sunday for the 30th day of La Liga, and gained two places in the standings to climb to second place, twelve points behind the leader, Real Madrid, Saturday winner of Celta Vigo (2-1). The inspiration that brought the goal came from the feet of Pedri in the 72nd minute: while Barça were dominating without managing to score from the start, the young 19-year-old midfielder appeared at the entrance to the surface, obliterated Ivan Rakitic and Diego Carlos with two feints then adjusted a perfect cross shot low to the ground that lodged in the lower left corner of the opposing cage.

For its part, Real Madrid is approaching the title (1st, 69 pts). Without their coach Carlo Ancelotti, positive for Covid-19, the Merengues benefited from three penalties, including two transformed by their fetish center forward Karim Benzema – who exceeded his highest total of goals scored in a season under the jersey of Real with 34 achievements in 35 matches in 2021-2022 in all competitions. Atlético Madrid got rid of the relegated Alavés (4-1) and is now 3rd in the standings behind FC Barcelona.


Inter Milan kept his scudetto dreams alive by winning a searing Italian derby against the Juventus (1-0). Massimiliano Allegri’s men had however started the meeting better. Chiellini nearly opened the scoring but his shot crashed into Samir Handanovic’s crossbar. It was finally Inter who took the lead on the scoreboard in a chaotic end to the first period. The team coached by Simone Inzaghi won a penalty after a foul by Morata on Dumfries. Szczesny initially stopped Calhanoglu’s shot but the referee had the penalty taken away and Calhanoglu did not miss his one-on-one this time to allow his team to race ahead at the break.

With this prestigious success in Turin, Inter Milan, struggling for a few weeks, is reviving in the title race, remaining three points behind the co-leaders, AC Milan, who plays Monday against Bologna, and Naples , Sunday winner of Atalanta (3-1). For its part, Juve remains 4th with 59 points on the clock.

Bayern won Saturday (1-4) in Freiburg and pushed Dortmund to nine points six days before the end of the Bundesliga, but their victory could be taken away from them following an incident at the end of the match. Following a confusion in the display of the changes, Bayern found themselves for about twenty seconds with 12 players on the lawn. The football authorities could sanction Bayern by granting victory to Freiburg on green carpet. If the Fribourgeois lodge a complaint, the match could also be replayed.

For the moment, Bayern leads with 66 points after 28 days, ahead of Dortmund (57 pts), which collapsed at home (1-4) against Leipzig, now only fourth (45 pts). Konrad Laimer, served twice by Nkunku, scored the first two goals for RB (21st and 30th). After the break, the Austrian returned the favor to French new international Nkunku, who scored in turn, taking his tally this season in the league to 16 goals and 12 assists. After Donyell Malen reduced the score (1-3, 84′), Nkunku again offered a goal ball to Spanish international Dani Olmo, whose superb shot went just under the bar (1-4, 86th). Leverkusen (51 pts) consolidated, for its part, its third place by beating Hertha (2-1).

after qualifying, Emma Raducanu achieves the feat of winning a Grand Slam

Basketball – NBA: This terrible observation on the arrival of Westbrook to the Lakers!

the France team qualifies for the 2023 World Cup

Basketball – NBA: James Harden lifts the veil on his retirement!