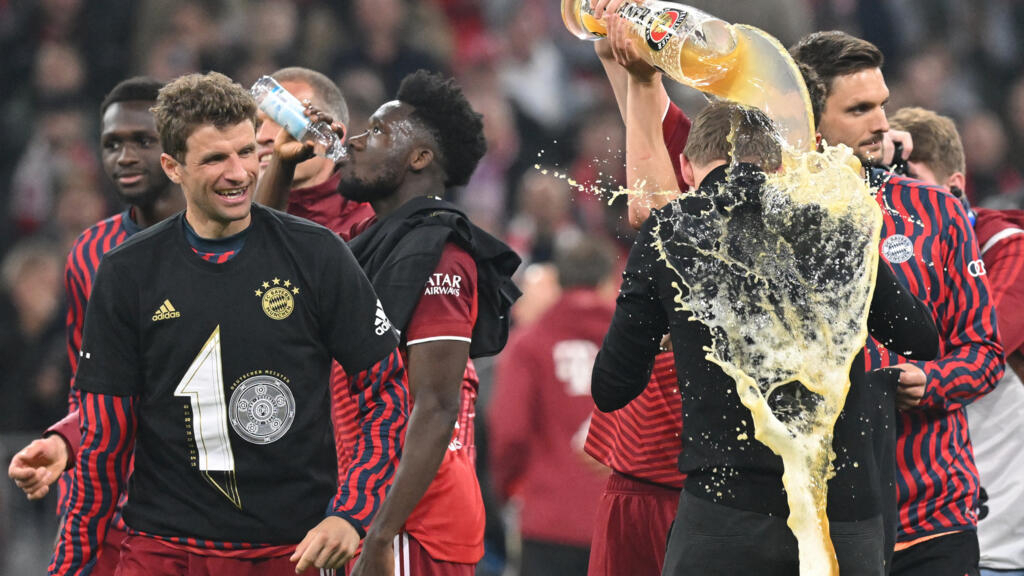 The European championships are approaching their conclusion. The championships of France and Germany already know their winner, respectively PSG and Bayern Munich. In England, the mano a mano continues between Liverpool and Manchester City.

• Ligue 1: PSG sacred but weighed down with questions

Paris champion… on the sly. With a flash of Lionel Messi against Lens (1-1), PSG won without shining their 10and title of champion of France, record equaled, in the strange atmosphere of a disillusioned Parc des Princes.

>> To read also: “PSG’s tenth title in Ligue 1: the tree of the historic coronation which hides a forest of questions”

Behind, Marseille tamed Reims (1-0) on Sunday to consolidate their second place in Ligue 1 thanks to a disconcerting goal from Gerson. This success, slow to take shape, was celebrated with effusion by the Marseillais at the Auguste-Delaune stadium: it allows the team to Jorge Sampaoli to keep his six-point mattress in second place, behind the untouchable Paris SG.

Behind the Marseillais (65 pts), only Rennes and Monaco (59 pts) seem to remain within reach of second place, directly qualifying for the next Champions League. After two defeats against direct opponents, Rennes finally resumed their march forward at the expense of Lorient, despite the exclusion of their defender Nayef Aguerd on the hour mark. Monaco for its part swept Saint-Étienne (1-4 ).

Nice returned to success by struggling to tame Troyes (1-0) on a goal from Khéphren Thuram (90and+4), climbing to fifth place. This dull match did not solve everything but it at least allows the people of Nice (57 pts) to get back into the race for Europe, in ambush two lengths from third place and ahead of Strasbourg (56 pts), cooled 1 -0 by a goal from Zeki Celik (87and) in Lille. The northern club (9and) keeps the crazy hope of hanging on to Europe while the Alsatian team, which had been undefeated for three months, sees its good series come to an end.

• Serie A: the title will be played between Milanese

AC Milan, winner of the snatch of Lazio in Rome (2-1) on Sunday during the 34and day, confirmed that the battle for the scudetto would now come down to a Milan derby, from which Naples, trapped in Empoli (2-3), seems excluded.

Milan is two points ahead of Inter, winner of AS Roma on Saturday (3-1), and seven over Naples. But the Nerazzurri can regain the lead on Wednesday if they win their late game in Bologna.

Napoli (3and), on the other hand, sees his dreams of scudetto flying away more and more for having scuttled himself in Empoli 3-2 after leading 2-0 until the 80and minute. The Neapolitan defense, orphaned by its “rock” Kalidou Koulibaly, suspended, sank in ten minutes, offering the Tuscans (14are) their first success since December.

Napoli, threatened to see Juventus (4and) return to a point in the event of a victory against Sassuolo on Monday, announced a sanction-like greening for the whole team.

• Bundesliga: Bayern Munich champion for the 10and consecutive time

Thirty-two German championship titles, ten of them consecutive, what no team had done in a major championship: Bayern Munich offered themselves this new trophy on Saturday in the most prestigious way, beating their historic rival Dortmund 3-1 at the Allianz Arena.

At the final whistle, the Bavarians sacrificed to the tradition of the “beer shower”, in particular generously sprinkling their coach, Julian Nagelsmann, with Bavarian blonde.

With 12 points ahead of Dortmund three days from the end, the Bavarians can no longer be joined and retain the “Schale”, the champion’s trophy they have held since 2013. Dortmund, with eight points ahead of its first pursuer Leverkusen, in principle has nothing to fear for his second place.

In other matches, RB Leipzig were beaten 2-1 at home by Union Berlin, against all odds, and gave up third place in the Bundesliga on Saturday to Leverkusen, a 4-1 winner on the lawn of the last and already relegated Fürth.

Real Madrid one point from the title! FC Barcelona lost again 1-0 on Sunday at Camp Nou against Rayo Vallecano in a late match of 21and day of La Liga, almost offering the title of champion of Spain to the rival merengue.

The Catalans gave in from the 7and minute on a goal from Alvaro Garcia, who deceived Marc-André ter Stegen from the right after getting rid of the marking of Sergino Dest, and suffered their third defeat at home in ten days, after the elimination of the Europa League conceded against Eintracht Frankfurt (3-2) and the 1-0 loss against Cadiz in La Liga.

Real Madrid will thus have a chance to celebrate its 35and title of champion of Spain on his ground Saturday (4:15 p.m.), in the event of victory or a draw against Espanyol Barcelona at the Bernabéu.

There is only one near-impossible scenario that could cause Barca to prevent Real from claiming the Spanish crown: it would require the Catalan club to win all five of its remaining league matches, and Real to lose them all.

Manchester City and Liverpool never leave each other. The Mancunians crushed Watford (5-1) on Saturday in the 34and day of the English Championship, temporarily taking a four-point lead over the Reds. Jürgen Klopp’s men, however, reacted perfectly the next day by winning the Merseyside derby hands down against Everton (2-0).

The Chelsea Blues struggled to overcome West Ham (1-0) at the very end of the game and retained their third place (65 pts) with a comfortable lead over Arsenal (60) and Tottenham (58). West Ham remain in seventh place.

This month of April will also remain as that of all paradoxes for the Gunners. Against Manchester United (3-1), they won their second convincing victory in three days after beating Chelsea at home (4-2). Two victories against two members of the “Big Six” who contrast with their three previous defeats, in the first half of the month, against second-tier teams (Crystal Palace, Brighton and Southampton).

The Gunners are back in front of Tottenham in fourth place, qualifying for the Champions League, five games from the finish line. The Spurs, for their part, delivered a very bland copy in Brentford (0-0), and are now two points behind their great rival in north London.