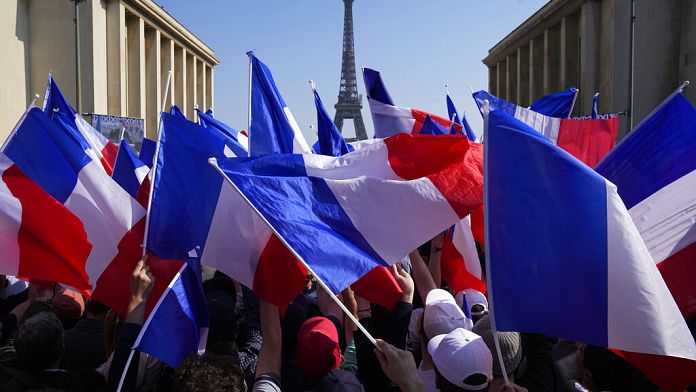 Less than two weeks before the first round of the presidential election in France, three candidates continue to widen the gap in the lead in voting intentions. Emmanuel Macron maintains a comfortable lead with 28%, ahead of Marine Le Pen at 17.5%, and Jean-Luc Mélenchon still on an upward trend with around 14% (figures from the Ipsos-Sopra Steria survey in partnership with the Sciences Po Political Research Center (Cevipof) and the Jean Jaurès Foundation, for Le Monde).

Former polemicist Eric Zemmour and right-wing candidate Valérie Pécresse are vying for fourth and fifth places, ahead of environmentalist Yannick Jadot. But beyond these figures, the threat of record abstention keep hovering. Without forgetting, the “hesitant” camp, 4 out of 10 voters among those who are sure to vote, have not yet made their choice.

The campaign entered its “official” phase on Monday. Each of the twelve candidates must have the same airtime and speaking time in the audiovisual media, according to the principle of “strict equality” controlled by Arcom. Campaign clips will also begin to air.

Emmanuel Macron, more liberal than in 2017, pleads for a France where “everyone works more”. He is moving this Monday to Dijon on the lands of the socialist left to meet high school students. He has made education one of his priorities.

Fearing to bear the brunt of an election that would be decided in advance, he appealed to abstainers on Sunday, stressing that “an election is the best way to make your choices”.

The candidate of the Rassemblement National experienced a hectic weekend during a first trip to Guadeloupe. Taken to task by far-left demonstrators, Marine Le Pen had to be evacuated from the set on which Guadeloupe La Première was to question her live.

Jean-Luc Melenchon remains the candidate best placed on the left. The candidate of “France Insoumise” was Sunday in Marseille. He attacked his two main opponents, warning against a “low-cost second round” between Emmanuel Macron and Marine Le Pen.

“Macron assassin” chanted at the Trocadero

Struggling in the polls, the far-right candidate Eric Zemmour raised controversy during his meeting at Place du Trocadéro this Sunday in Paris. Some of his supporters chanted “Macron assassin”! The other candidates did not fail to denounce these excesses.

At a time of climate emergency, the environmental candidate, Yannick Jadot is struggling to get out of the game. On Sunday, 4,000 supporters gathered at the Zenith in Paris. The “biggest meeting in the history of political ecology in France”, according to Delphine Batho, spokesperson for the candidate. He stays “two weeks to lift the smoke screens“, he said, inviting to “oppose Jadot and Macron” in the second round, because “it is the survival of our humanity that is at stake today”.

Last week, Yannick Jadot made himself heard by hitting hard on TotalEnergies in the context of the war in Ukraine. He was sued for defamation after accusing the group present in Russia of “complicity in war crimes”.

Sick with Covid-19, Valérie Pécresse had to put her campaign in the field on hold this weekend, but took the opportunity to organize a “public meeting” by videoconference.

Despite the entry into force of the rigorous rules of the official campaign, the “small candidates”, credited with less than 3% of voting intentions protested on Sunday, Jean Lassalle (Let’s resist!) denouncing “a soft dictatorship” and Nathalie Arthaud (LO) a broad “problem of pluralism” in society as a whole.

The “great green wall”: in Mauritania, the difficult fight against the advance of the desert