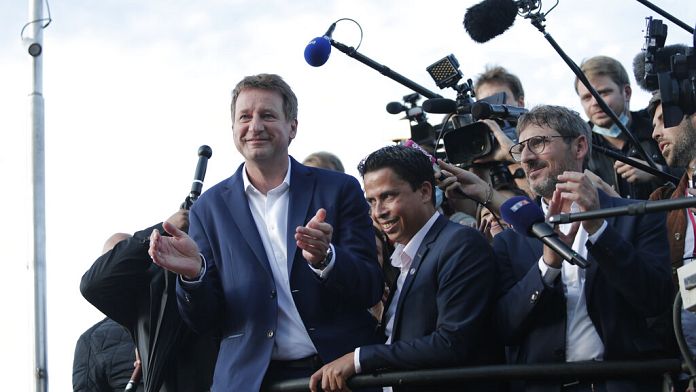 The MEP Yannick Jadot beat by a short head the”eco-feminist” Sandrine Rousseau and won Tuesday the primary of the environmentalists, enforcing his status of favorite despite the dynamics of his rival.

Yannick Jadot, 54, finally made his favorite status speak by obtaining in the second round 51.03% of the approximately 104,000 votes cast among the 122,670 registered in this online election, against 48.97% for his opponent.

This result is undoubtedly a relief for many EELV executives, who rallied to the MEP in the between-two-rounds, believing that he had the most chance of shining ecology in the presidential election.

The result was announced in a bar-restaurant in Pantin (Seine-Saint-Denis), where the two finalists are expected in the early evening, after learning the news from their respective headquarters, not far away: Yannick Jadot on a barge-bar, Sandrine Rousseau in a solidarity restaurant training people far from employment.

Yannick Jadot now has the challenge of gathering environmentalists that the first round had roughly divided into four blocks. But also to impose his candidacy within a left already well stocked with aspiring presidents, from the Insubmissive Jean-Luc Mélenchon to the socialist mayor of Paris Anne Hidalgo through the former minister Arnaud Montebourg and the communist Fabien Roussel.

In the first round with 27.7% of the vote, Yannick Jadot narrowly beat Sandrine Rousseau (25.14% of the vote). The latter had confirmed its good media momentum by qualifying at the expense of former minister Delphine Batho (22.32%), cantor of “decay”, and the mayor of Grenoble Eric Piolle (22.29%), who defended a “humanist arc” that could gather all the forces of the left.

Neither of the two unfortunate challengers had given a voting instruction for the second round, accentuating the suspense over the postponements of votes. Only the entrepreneur Jean-Marc Governatori, last in the first round (2.35%), called to vote for Yannick Jadot.

The two finalists differed in particular on how to bring ecology to power.

In a party adept at turning things around, where the favorite rarely wins (Cécile Duflot beaten in 2016, Nicolas Hulot in 2011,…), “very clever the one who can make a prognosis”, stressed before the result the ecologist mp ex-LREM Matthieu Orphelin, who has always supported Yannick Jadot. But he saw as “a very positive sign all the great voices of ecology who take a position” for the MEP.

If he believed that the voters of Piolle were able to vote Yannick Jadot, who took up some of the measures advocated by the mayor of Grenoble, “the real enigma” concerned, according to him, those who voted for Delphine Batho, “an electorate difficult to identify”.

“It necessarily helps even if it will not make the primary”, explained in the entourage of the MEP, summarizing : “we need an ecology that brings society together, and for this we must start by bringing together environmentalists”.

But Sandrine Rousseau “is not supported by environmentalists, but by people who have the same cause as her,” said the same source. If she wins, “after a month her campaign can explode”, due to the cut-off with the party cadres.

The candidate had received the support of feminist figures, such as Paris councillor Alice Coffin and filmmaker Céline Sciamma.

The electoral body of the primary is constituted “only a little more than 12% of adherents of the ecological pole. It is not the rallies of this or that framework that will make the election but the 100 000 people who remain”, analyzed his entourage, believing that “it is a political and strategic mistake to ban the party to save the soldier EELV”.

Both promised to rally behind the winner.

The result will have a great impact on the left. Especially within the Socialist Party and France Insoumise who hope, each, to attract the disappointed of the primary. In private, a PS framework tackles the”political ecology, unidentified political object. Is it decay, cooking at woke or ecology manager, we do not know very well”.