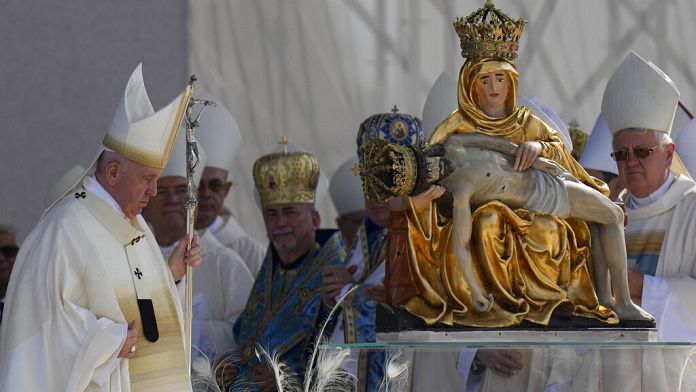 Pope Francis on Wednesday wrapped up a four-day trip to Slovakia, a country of 5.4 million people in the heart of Europe, by heading to the Marian shrine of Sastin”for an open-air mass in front of 50,000 people.

During his trip, the 84-year-old Pope gave twelve speeches and visited five different cities, with a stopover in Budapest to preside over a religious congress, not hiding his pleasure in exchanging with bishops and young people.

Accompanied by a doctor and two nurses during this trip, he appeared smiling and in good shape.

The shrine of Sastin, or Basilica of the Seven sorrows of the Virgin Mary, whose history dates back to the 14th century, is a very famous pilgrimage site in Slovakia.

The Pope first met bishops on Wednesday for a time of prayer in the basilica of the sanctuary, before presiding over a mass in a huge adjoining field that he had previously walked in a papamobile, offering himself his biggest crowd bath of the trip.

In front of the faithful of Slovakia, a former communist country that claims to be 60% Catholic but proves to be little practicing, the Pope advocated “a faith that does not remain abstract”, which “makes solidarity with those in need”.

He asked them to practice “acceptance” in the face of “personal and collective selfishness”.

The crowds were less dense than expected for the various stages of Pope Francis in this country where the fear of the contagion of Covid-19 is real. Only half of the adult population is vaccinated.

The former Pope John Paul II had visited Slovakia three times. His last trip, in December 2003 for four days, had been particularly harrowing for the elderly and ill Polish pope.

He closed the trip with a solemn mass in Bratislava attended by 200,000 people. Many Christians had spent the night there, in tents or under the stars in sleeping bags, waiting for him.

Among the participants of the final mass of Pope Francis at the shrine of Sastin was the former private secretary and close friend of John Paul II, the Polish cardinal Stanislaw Dziwisz. The latter is currently the subject of a legal complaint for concealing pedophile affairs of the Church.