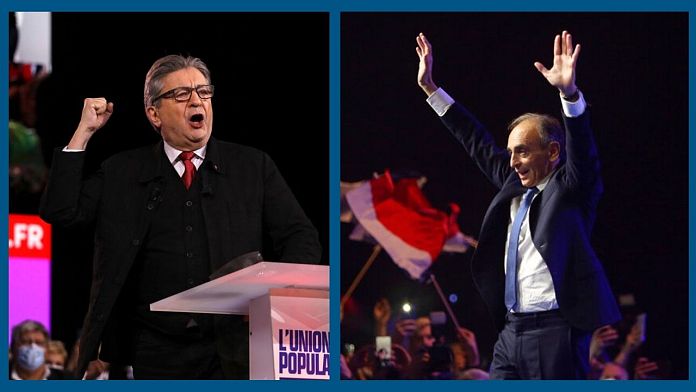 Éric Zemmour gathered several thousand supporters this Sunday at the Villepinte Exhibition Center (Seine-Saint-Denis), for a first campaign meeting supposed to demonstrate the strength of his candidacy.
At the same time, Jean-Luc Mélenchon (leader of La France Insoumise) also held a meeting at La Défense (Paris).

They were 13,000 to have gathered around their candidate, according to the organizers. Figures which question certain journalists present in the room.

More than 400 journalists have been accredited. Before the meeting started, a crew from the “Quotidien” program was booed by the audience with cries of “and everyone hates Daily“, before being briefly sheltered.

Initially planned at the Zénith, in La Villette, in the north-east of Paris, the meeting was finally relocated to Villepinte, in the suburbs. Eric Zemmour’s team explains it by “popular craze“, but also admits security reasons.

A dense system has been deployed in Villepinte. Tensions erupted at midday between dozens of opponents to the arrival of Eric Zemmour and the police, in front of the RER station.

Activists from SOS Racism, present in the room to denounce the “racism” of the candidate, were attacked violently by supporters of the polemicist.

In Paris, some 2,200 demonstrators according to the prefecture, 10,000 according to the organizers, gathered in peace to denounce the candidacy and the “racist” speech of Eric Zemmour, at the call of fifty unions, parties and associations .

Jean-Luc Mélenchon and his supporters

“Enough hesitation, in combat! “: the boss of La France insoumise beat the recall of the troops this Sunday at La Défense (Paris).

The rebellious candidate, credited with 7.5 to 10% of voting intentions in the polls, is so far far from the nearly 20% achieved in 2017.

“We’re here! After everything you’ve done to us, we’re still here!”, he proclaimed in reference to turbulent years. At the Espace grande Arche, he gathered around 4,500 people, according to LFI.

While the left is divided in the race for the Elysee Palace, Mr. Mélenchon launched his “People’s Union parliament” on Sunday, participating in the morning in the first monthly meeting of its 200 members.

In the countryside for more than a year already, he chose this Sunday to hold a meeting. “It strengthens our position: we’re here, it’s not just Zemmour, and it’s not just the right“, estimated to AFP Manuel Bompard, campaign director.