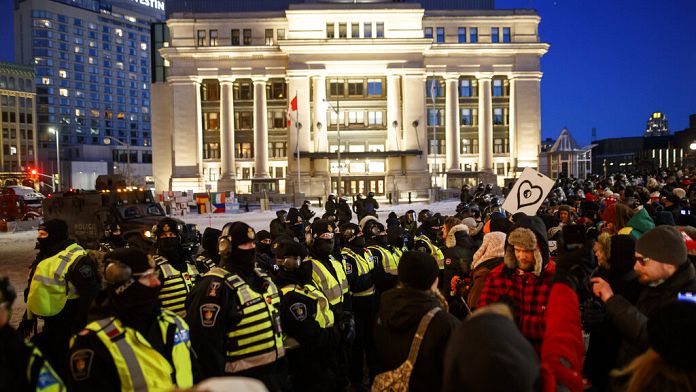 A tense face-to-face but no clashes: Canadian police arrested 70 people Friday as part of its intervention to dislodge truckers and demonstrators who have been blockading central Ottawa for three weeks to protest against sanitary measures.

He added that the operation was taking place “as expected“but what she would take”time“.

“We keep gaining ground to free the streets“, he said, adding that there had been no injuries so far.

Hundreds of police were deployed in the streets of the federal capital in the face of demonstrators who refuse to leave the scene despite numerous warnings and the declaration of a state of emergency.

The police, who surrounded the entire area of ​​​​the demonstration, slowly tightened their grip on the protesters but had not yet reached the main avenue, which runs along the parliament.

In some arteries covered with fresh snow, the first vehicles were also towed. Authorities continue to warn protesters to leave the area or be arrested.

“You have to leave. You must cease all illegal activity and immediately remove your vehicle and/or property from all illegal protest sites. Anyone at the site of an illegal demonstration can be arrested“, tweeted the police.

Most of the protest leaders have been arrested. Far-right activist Pat King was arrested early Friday afternoon as he was leaving town. His arrest was made live on Facebook Live. Shortly after, it was the turn of former police officer Daniel Bulford.

Two other leaders, Tamara Lich and Chris Barber, were arrested Thursday evening and were due to appear in court on Friday.

Minimized at the start by the authorities, this movement, which began at the end of January, started from truckers protesting against the obligation to be vaccinated to cross the border between Canada and the United States.

But the demands have extended to a refusal of all health measures and, for many demonstrators, to a rejection of the government of Justin Trudeau. The latter said Thursday that this challenge was no longer “peaceful”.

Some demonstrators had sworn before the police intervention to hold out until the end. Installed since day one, Csaba Vizis said he was ready to “go home glorious like Caesar or in a body bag”. “I have nothing to lose, I win this or I die,” says the 50-year-old trucker.

On its Twitter account, the movement was still trying to rally on Friday: “If you do not agree with the illegal and unprecedented excesses of the government, abandon everything you are doing and come and make your voice heard! Canadians, your country needs you”.

For the first time since the start of this dispute, which is taking place under the windows of the federal Parliament, the latter remained closed on Friday. “Today’s sitting is cancelled” for security reasons, announced Anthony Rota, Speaker of the House of Commons.

The chamber has been examining since Thursday the implementation of the law on emergency measures invoked on Monday by Justin Trudeau to put an end to the “illegal” blockages in progress in the country.

It is only the second time that this provision has been used in peacetime, the last time dating back to the crisis of 1970 when Pierre Elliott Trudeau, the father of the current Prime Minister, was in power. It is highly contested by the conservative opposition.

“Our economy and our democracy are facing a serious, foreign-funded threat,” Deputy Prime Minister Chrystia Freeland said on Friday.

“These illegal blockades and occupations cannot be allowed to usurp the authority of democratically elected governments,” she added. The day before, she had indicated that bank accounts of people or companies linked to the demonstration had been frozen.

According to the government, border blockades by protesters have cost “billions of dollars to the Canadian economy”. It is these blockages and in particular that for seven days of the Ambassador Bridge, which connects Ontario to the American city of Detroit, which prompted Washington to intervene with the government of Justin Trudeau.

The city of Ottawa, the province of Ontario and Canada as a whole have been placed in a state of emergency due to this unprecedented protest movement.

French presidential election: a sluggish electoral campaign, one month before the ballot

“There were half-burned bodies”: in Boutcha, the spokesperson for the Ukrainian president testifies

Internal Ukrainian refugees: report from Berehove, a town on the border with Hungary