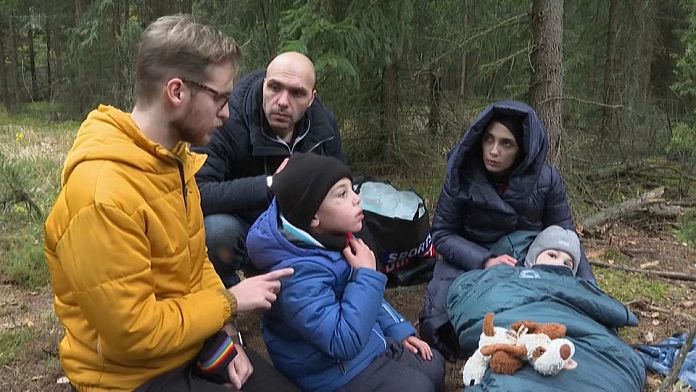 Huddled in a sleeping bag lying flush with the ground in the middle of the forest, a young Syrian smiled when a Polish activist walked a stuffed animal on his chest. She leans over to her mother, shakes her hand and asks : “Is everything okay?”.

The family of four just spent a week in the cold, damp woods between the Belarus and the Polandlike thousands of migrants who have been trying to enter the European Union since this summer.

“Choosing between death and Poland”

After embarking on the journey to seek treatment for their son with cerebral palsy, mother Ala Massini says they found themselves stuck between Belarus and Poland.

“They (Belarusian soldiers) told us that we had to choose between death and Poland”, explains the 25-year-old, sitting under the pines, near the small Polish town of Kleszczele.

“We went to the Polish side to ask for help from the army. We asked to pass because the children were hungry and cold, and they were sick, but they told us to go back to Syria.”she continues.

The family then contacted a network of Polish volunteers, Grupa Granica (Border Group), whose coordinates circulate among the migrants and who provide them with dry clothes and food.

They offered legal aid and supervised the meeting with the border guards.

Members of NGOs, doctors, politicians or ordinary citizens, they find ways to help.

“A lot of people have reached out. Many want to help search the woods for those who need help, a hot meal, water, warm clothes”Marysia Zlonkiewicz told AFP.

Hundreds of exiled people are on the Polish side of the border and thousands in Belarus – most of them being repeatedly returned between the two countries, “like footballs”, laments the activist.

The exiles report that the Belarusian side refuses to let them return to Minsk to return home, while the Poles refuse to let them through and file asylum applications. And push them back to Belarus.

Some manage to avoid the border guards and cross into neighboring Germany, which also records an increase in the number of border crossings.

The European Union suspects Belarus is behind the unprecedented influx of exiles, mostly from the Middle East, to Poland in retaliation for European sanctions.

The Polish government has introduced a local state of emergency that prohibits journalists and aid workers from entering the immediate border area. The authorities also want to build a border wall.

Several migrants died trying to cross the border and police reported incidents in which migrants threw sticks and stones at security forces.

The volunteer group Medycy na granicy (Doctors at the border) called the situation “dramatic”. The coordinator of the group, Jakub Sieczko, says that most of those found are suffering “exposure to bad weather, dehydration, malnutrition”.

“Unfortunately, the exclusion zone status prohibits us from entering it” despite “the humanitarian crisis”, he regrets.

Good Samaritans risk fines and arrests if they venture there. Only local residents are exempt from the ban and a few have joined the aid movement.

“If we do nothing, it will really lead to a tragedy”

The nearby town of Michalowo made headlines when border guards sent a group of exiles, mostly women and children, back into the woods despite their asylum claims.

In response to the media outcry, local authorities decided to act. The premises of the fire station are now filled with bags and cartons with food and clothing.

“Winter is coming. If we do nothing, it will really lead to a tragedy”, had indicated the mayor Marek Nazarko during a demonstration against pushbacks.

Speaking on condition of anonymity, a border guard denies accusations of ill-treatment : “we would never hurt anyone. Claims that we confiscate their SIM cards and beat them are completely false”, she assures.

Krystyna Luczewska, retired, came by car from the nearby town of Bialystok with five bags of winter clothes. “I think mostly about children”, slips, very moved, this 66-year-old grandmother.