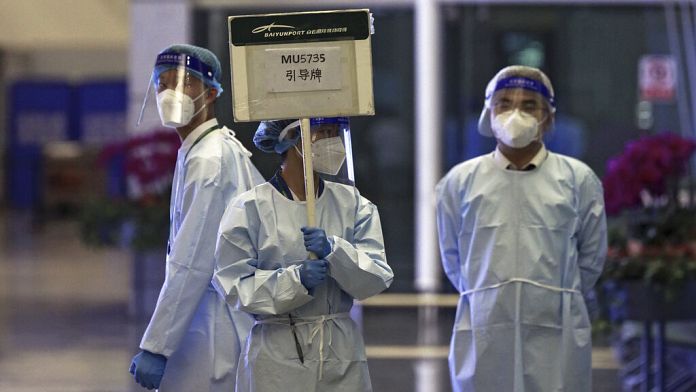 Rescuers face rain and mud on Tuesday in search of traces of the 132 people aboard the Boeing-737 which crashed in a mountainous area in southern China, after falling just a few minutes.

The causes of the disaster remain unknown 24 hours after China Eastern Airlines flight MU5735. Monday evening, the company presented its tributes to the victims, but without specifying their number.

Videos released by public media show a kind of clearing formed by the device in a wooded area, with little recognizable debris, apart from a piece of the wing in the blue and red colors of the company.

The bodies and personal effects of the passengers were probably “entirely burned” by the explosion of the aircraft on the ground, followed by a fire, said a rescuer who spent the night at the site.

The search is complicated by the rugged terrain and dense vegetation, said the woman who refused to say her name. Police were blocking access to the crash site in a village surrounded by forests and rice paddies.

Xi Jinping: “We will quickly determine the cause of the accident”

Unusually for a Chinese leader, President Xi Jinping reacted hotly on Monday night, calling for “determine the causes of the accident as soon as possible”.

His main economic adviser, Vice-Premier Liu He, went there to supervise the rescue and the investigation, according to the new China agency.

According to the specialized site FlightRadar24, the device, which linked Kunming (southwest) to Canton (south), lost in barely a minute almost 21,250 feet (6,477 m) before disappearing from radar screens.

A video broadcast by Chinese media shows a plane nose down vertically, but AFP was unable to verify its authenticity.

The accident could prove to be the deadliest for Chinese civil aviation since 1994. The last air disaster dates back to 2010, with a death toll of around forty.

According to the financial media Yicai, China Eastern decided, without waiting for the results of the investigation, to suspend all its 737-800s.

Shares of the carrier lost nearly 9% on Tuesday at the opening of the Shanghai Stock Exchange.

Boeing, for its part, said it was ready to cooperate with the investigation by the Chinese authorities. The title of the manufacturer lost 3.6% Monday at the close of Wall Street.

The accident falls badly for the American aviation giant, which was about to resume deliveries of the 737 MAX, another type of aircraft suspended in early 2019 following two air disasters.