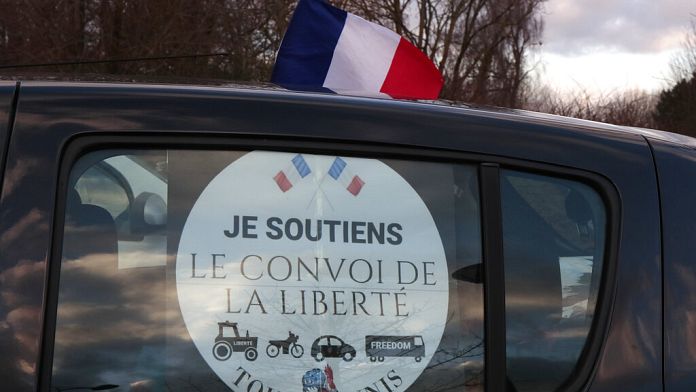 Drive to Paris but then? Leaving in a “convoy” on the roads of France, several thousand opponents of the vaccination pass, inspired by the protests born in Canada, want reach the outskirts of the French capital on Friday evening.

“We are determined, but not aggressive“, “We’re together, it’s beautiful!”, comments under the horns and the French flags in the wind, Olivier, a Breton participant, when setting off from Brest at the wheel of his car.

Since Wednesday, these first “convoys of freedom“French people left by car, motorhome or carpool from Nice, Bayonne or even Perpignan and were to continue to set off on Friday morning from the towns closest to Paris.

The movement, initiated a week ago on social networks, presents itself as “the next step“anti-government street demonstrations, “yellow vests“and more recently opponents of the health pass, on the model of the convoys of anti-health measures demonstrators who have been blocking major border axes between Canada and the United States for several days and threatening the economy.

In Ottawa, the Canadian capital, the “Freedom Convoys” paralyzed the city and forced Prime Minister Justin Trudeau to put the city ​​in a state of emergency.

“If people want to demonstrate normally, they will be able to do so. If they want to block the traffic, we will intervene“, Interior Minister Gerald Darmanin warned Thursday evening on the LCI television channel.It’s not the mess, the French Republic“, launched Mr. Darmanin.

Refuting any attempt at blocking, the participants hope to converge in the evening on Paris, spend the night there each as they can, then participate on Saturday in the various weekly processions against the vaccine pass organized in the capital.

Some will then try to rally Brussels for a “European convergence” scheduled for Monday, February 14. However, the Belgian authorities have decided to deny them access to the capital, since they did not request it.

In Paris, the Paris police headquarters also issued a ban on this mobilization on Thursday for “risk of public disorder“.

One “specific device“, in particular composed of “task forces“and removal gear must be in place to”to prevent the blocking of roads, verbalize and challenge offenders“, Who “incur six months in prison and a fine of 7,500 euros“, insisted the prefecture.

In the spirit of conviviality and social ties that had marked the beginning of the movement of “yellow vests” around roundabouts in 2018, several convoys spent the night in rest stops or with individuals who had opened their accommodation or car park.

“These first departures give a lot of hope, it fills the heart and it is the objective of this movement, to set up a chain of active solidarity, from accommodation to packed lunches“, commented to AFP, one of the initiators of the movement, under the pseudonym of Rémi Monde.

At the forefront of the demands of the participants: “the withdrawal (…) of the pass and of all coercive or pressure measures related to vaccination“, in addition to measures of purchasing power or the cost of energy.

“We demonstrated, and we can continue but we see that it only leads to confrontation, repression and violence“, explained to AFP the initiator, “we want to try something else, and see what the government’s response will be to peaceful and happy people“.

Several presidential candidates have given their support to this movement, including Marine Le Pen, Eric Zemmour (extreme right) or the radical left party La France insoumise (LFI) which has “encouraged” its militants who wish to join. to this movement.

Germany: who negotiates what and with whom ?

War in Ukraine: Mariupol in ruins