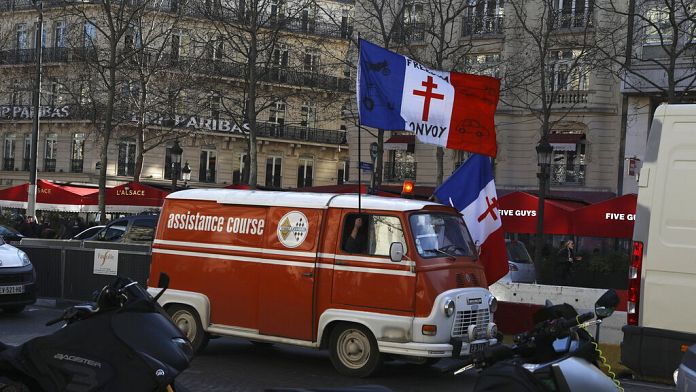 Several demonstrations by opponents of health measures took place on Saturday in Europe, some inspired by the movement of Canadian truck drivers, who are blocking the federal capital Ottawa.

In The Hague, blockade lifted in the afternoon

Opponents of health restrictions who came to protest in convoys from all over the Netherlands left the city center of The Hague on Saturday after blocking it for several hours, according to the police.

“Protesters who blocked The Hague city center today with trucks and others have now left the city“, said on Twitter the city police, who had ordered the participants to leave the premises before 3:30 p.m., threatening them with arrest and a fine.

According to Dutch public television, several hundred vehicles blocked the famous “Binnenhof”, where several national decision-making and legislative centers are located. The first demonstrators arrived at 7:30 a.m. in trucks, cars, and even tractors and caravans to demand an end to health restrictions. They stayed there for several hours.

“The demonstration (…) is quietly coming to an end”, for their part declared on Telegram the organizers, who had initially called on the demonstrators to stay and asked to discuss with the mayor of the city.

Some protesters said they would continue to Brussels or Paris. Others vowed to return to a protest against health restrictions scheduled for Sunday in The Hague.

The municipality of The Hague had put an end to the demonstration, which had not been announced, around 3 p.m., and the police ordered the participants to leave. Vehicles began to leave the scene relatively quietly from 4 p.m., but trouble broke out after the trucks left, Dutch news agency ANP reported.

The anti-pass convoys swelled the demonstrations but without blocking Paris

Some went to the Champs-Elysées to disrupt traffic, others marched in the authorized demonstrations, but the participants in the anti-pass convoys, which left from all over France, did not block Paris as they wanted.

Around midnight, the police were still trying to disperse a few dozen irreducible demonstrators near the Champs-Elysées, after having managed to push them back into adjacent streets.

Earlier in the early afternoon, more than a hundred vehicles had joined this famous avenue in the capital, motorists, some now on foot, waving flags or chanting “freedom”, while their demonstration had not not been allowed.

The situation then became tense: the Place de l’Arc de Triomphe then the avenue were gradually evacuated by the police using tear gas.

Interior Minister Gérald Darmanin said in a tweet on Saturday evening that 337 people had been fined and 54 arrested by the police in Paris.

Hundreds of opponents of anti-Covid measures marched in Munich on Saturday, shouted down by thousands of counter-protesters who called them “Nazis”, media reported.

Neither protest had been authorized and police used tear gas, water cannons, fired rubber bullets to disperse the crowds and made arrests, according to video footage.

Police did not provide estimates of the number of attendees. The ATS agency estimated the number of counter-protesters at several thousand.

The latter traveled through the city by different routes, disrupting traffic and clashing with the police.

“Some participants in the unauthorized demonstration tried to break through the police roadblocks. This is the reason why water cannons, rubber bullets and tear gas were used,” the police said in a tweet. Zürich.

“Emergency services were at times seriously harassed and had to resort to police resources,” police said.

The police also said they had arrested a “large and potentially violent group” of people belonging to the far-right movement in the old town of Zurich.

Emmanuel Macron proposes an emergency plan for food security, in the face of the risk of famine