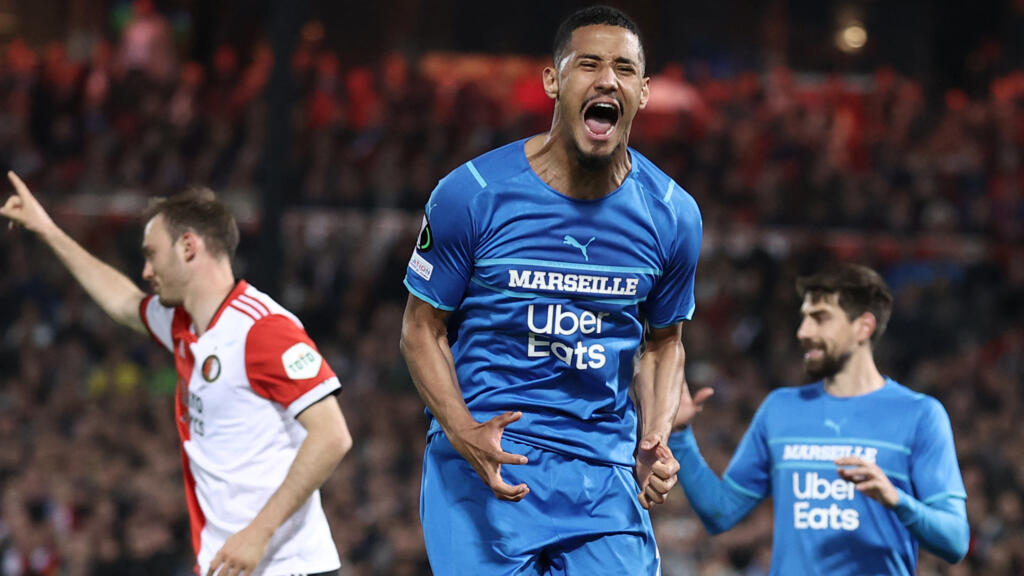 Olympique de Marseille fell on Thursday against Feyenoord in the semi-final first leg of the Europa League Conference. The return match, next week at the Vélodrome, still gives the Marseillais one last chance to qualify for the final.

The final remains in sight: severely shaken Thursday, April 28 in Rotterdam by the Feyenoord, theOM was beaten 3-2 in the first leg of the Europa League Conference and punished for its defensive inconsistencies, but the return match at the Vélodrome can still allow the Marseillais to win a sixth European final.

Arrived in the Netherlands with a series of ten wins in 11 matches, OM fell from quite a height in Rotterdam. Last French representatives in Europe, the Marseillais perhaps hoped for another result, but they were too weak defensively, in a match which saw two teams confront each other who were playful in front and generous behind.

From the start, Feyenoord put a lot of intensity, in the wake of a furious pre-match, where the De Kuip stadium was transformed into a gigantic open-air nightclub before being covered in smoke from dozens of torches lit by Dutch and Marseille supporters.

To trap the opposing defense, Jorge Sampaoli had bet on the speed of Bakambu and especially Dieng, rather than on Milik, again returned to the bench. The plan could have worked from the start but the young Senegalese, twice launched in depth, twice missed the opportunity, first by stumbling over Marciano (8th) then by hitting wide (14th).

But apart from these two actions, the Marseillais suffered terribly and with each rush of the Feyenoord attack, the glasses of beer flew away. And the cups rose even higher when the locals knocked out OM with two goals in two minutes.

In the 18th minute, it was first Dessers who opened the scoring after an assist from Sinisterra in a backheel. The Colombian winger, his team’s best player, then scored the second on his own, with a deflected shot by Rongier (2-0, 20th).

Marseille was then far from Tirana and the final of May 25, carried away by the fury of the stadium where David Trezeguet had offered the Euro-2000 to the Blues with a golden goal. But when they were really asphyxiated, Payet and his family found some air on a nice collective action this time well concluded by Dieng with a strike from the right (2-1, 28th).

At the time, we could see that the Dutch hinge was suspicious and its goalkeeper doubtful. The impression was confirmed ten minutes later with the Marseille equalizer. Starting from Gerson, the movement resulted in a recovery from the Brazilian, irresistible at the moment, after going through Payet and Guendouzi, via a bad intervention by goalkeeper Marciano (2-2, 40th).

OM had come out of the storm but the Provençals recovered on their own in the difficulty with an incredible blunder by Caleta-Car from the start of the second period. Like a bad gift for Mandanda’s 100th European outing with OM, the Croatian sent his goalkeeper a soft and completely missed back pass. Dessers intercepted it and the glasses of beer flew again (3-2, 46th).

OM had a little trouble recovering from this absurd third goal and what followed was sometimes the same thing, with terrible defensive fears, born of the incredible feverishness of Caleta-Car and Luan Peres.

There were a few attacking thrills too, with Dieng missing two more great opportunities to equalize, and Harit getting into the game well. At the end of the match, Marciano then Mandanda each made a decisive save but the score did not move.

The name of the finalist will therefore be decided during the return match on Thursday in Marseille. He will miss the Virage Nord, closed by UEFA after several incidents this season, but the Vélodrome, like De Kuip on Thursday, will have its part to play. But before that, Marseille must receive Lyon on Sunday. The appointment is no less important. Because OM want to keep their second place and return to Europe next season, the big one.

the Brazil-Argentina match, interrupted for a sanitary imbroglio, will be replayed

Sébastien Haller, the Ivorian goalscorer who shines with Ajax