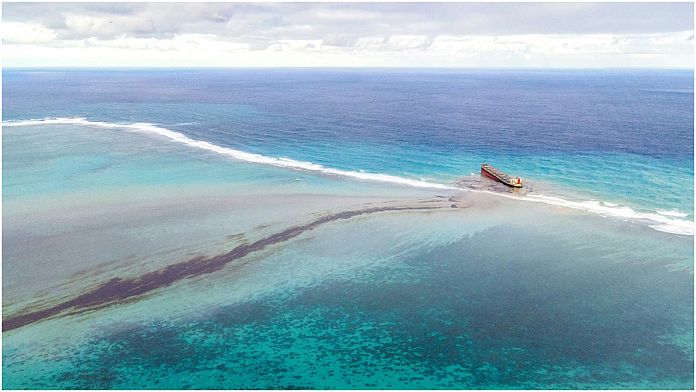 The captain and mate of MW Wakashio, a ship whose grounding caused the worst oil spill ever on the coast of Mauritius in 2020, were sentenced Monday to 20 months in prison.

“The court took into consideration that the two defendants pleaded guilty and apologized. The sentence handed down is 20 months in prison.”, said judge Ida Dookhy Rambarrun.

The Japanese bulk carrier ran aground on July 25, 2020 on a coral reef in the south-east of Mauritius, releasing more than 1,000 tonnes of fuel oil into its crystal-clear waters.

The Indian captain, Sunil Kumar Nandeshwar, who admitted during the hearing that he had been drinking at a party organized on the ship, was found guilty, as was his second Sri Lankan Hitihanillage Subhoda Janendra Tilakaratna, of “endangering the safety of navigation“by a court in Port-Louis.

The MW Wakashio, under the Panamanian flag, was en route from Singapore to Brazil, with on board

3,800 tonnes of fuel oil and 200 tonnes of diesel which quickly started to leak, but the majority of which could be pumped out.

This oil spill was the worst maritime pollution in the history of the country which depends on its waters for its food security and for ecotourism, in an area which is among the most beautiful coral reefs in the world.

The south-eastern coast of Mauritius has two classified sites: Blue Bay, known for its corals, and Pointe d’Esny, rich in mangroves, crucial ecosystems in the face of global warming.

From the first days, the inhabitants had mobilized, working tirelessly with makeshift means, to contain the pollution.

Equipped with boots and rubber gloves, thousands of people had worked to clean the shores and corals, including making booms using rags to keep oil floating on the surface of the water at bay.

In the months following the disaster, Mauritians demonstrated by the thousands across the island, notably to denounce the government’s mismanagement of the oil spill.

The dead end in Guadeloupe, the overseas minister and elected officials at the antipodes