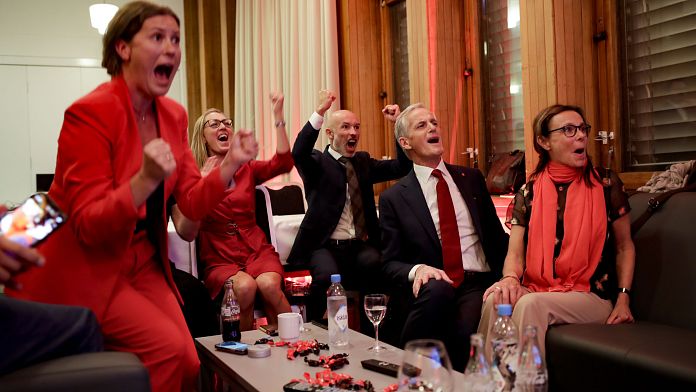 After 8 years of conservative government, Norway is ready for the center-left.

The country’s labour party and its allies won a clear majority in the general election, following a campaign dominated by environmental policies and the future of the country’s oil and gas exploration. Turnout in these elections was 77 per cent.

“Norway has therefore made it clear that the Norwegian people want a fairer society. Thank you very much to everyone who contributed to this and voted for change.”

During the campaign Jonas Gahr Støre, who owns a considerable fortune, more than 140 million kronor (about 14 million euros) according to the magazine Kapital, campaigned against” social inequalities ” in Norway.

It is one of the most egalitarian countries in the world according to the OECD, but the number of billionaires there has more than doubled under the outgoing right-wing team.

The current Prime Minister Erna Solberg, 60, admitted defeat. Due to her longevity in power and her beliefs in economic liberalism, she is nicknamed “Iron Erna”. She developed oil exploration in Norway while reducing taxes. But she had to lead the country through multiple oil, migration and health crises.

Negotiations in sight for the coalition

Now is the time for negotiations to form a coalition government. Negotiations that promise to be long and delicate, as the opposition parties are not quite on the same page in terms of the environment and oil exploitation.

The labour party and the other 4 opposition parties are expected to win 100 of the 169 seats in the Storting, Norway’s unicameral parliament.

With 89 mandates so far, Labour seems on course to win an absolute majority with its preferred allies, the Centre Party and the Socialist Left.

The trio could thus do without the other two opposition forces, the environmentalists of MDG and the communists of Rødt, with whom Jonas Gahr Støre nevertheless expressed his determination to discuss.

MDG had conditioned its support on an immediate halt to oil exploration in the country, the largest exporter of hydrocarbons in Western Europe, an ultimatum rejected by labour.

So will Labour get along with the Centre Party and the Socialist Left ?

It should be noted that in Norway, the Centre party mainly defends the interests of the rural world, and that the Socialist Left is more concerned with environmental issues.

These allies often hold opposing positions, notably on the urgency to exit the oil age, and the centrists of Trygve Slagsvold Vedum said during the campaign that they did not want to sit with the Socialist Left of Audun Lysbakken.

The “red alert for humanity” launched in early August by the UN climate experts (Ipcc) placed the issue of global warming at the heart of the election campaign of these elections and forced the kingdom to reflect on the fate of the oil activities that have made it immensely rich.

The report has galvanized those on the left and, to a lesser extent, on the right who want to end oil. To date, the oil sector accounts for 14% of Norway’s gross domestic Product, more than 40% of exports and 160,000 direct jobs.

Black gold also allows Norway and its 5.4 million inhabitants to have the largest sovereign wealth fund in the world with nearly 12,000 billion kronor in assets (1,166 billion euros).

How will the future coalition manage the aftermath ? Hard to predict. Until now, like the Conservatives, Labour has advocated a soft and gradual exit from the oil economy.

The Pope praises the “gift” of “celibacy”: colloquy at the Vatican on the role of priests

The anguish of distraught Ukrainian expats desperate to help

Internal Ukrainian refugees: report from Berehove, a town on the border with Hungary