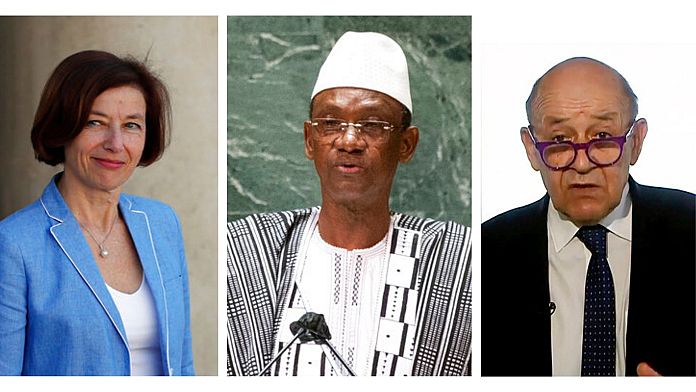 French leaders denounce the recent remarks of the Malian Prime Minister. The latter accused France of”abandoning”Mali, by reducing its military presence. This is wrong, Paris reacted.

The French authorities did not at all appreciate the recent speech of the Malian Prime Minister at the UN rostrum. The latter accused France of”give“Mali, by reducing its military presence. In his speech, Choguel Kokalla Maiga denounced a “lack of consultation“and a decision “unilateral“.

Reaction of the commander of the Barkhane force

The new commander of Barkhane, General Laurent Michon, assured that, on the contrary, the decision to evacuate the French forces from their three northernmost positions in Mali had been carefully considered and discussed.

« The plan to leave Kidal, Tessalit and Timbuktu dates from about two years ago, 18 months to two years ago. __It was elaborated with the Heads of State of the G5 zone (G5 Sahel: Mauritania, Mali, Niger, Burkina Faso and Chad, ED.), especially in Bamako and Niamey with political authorities who know the project, who want it, within the framework of the Peace Agreement “, he said.

The French plan calls for an evacuation of Kidal, Tessalit and Timbuktu to refocus the troops around Gao and Ménaka, closer to the “zone of the three borders”, on the borders of Niger and Burkina Faso.

« If the Prime Minister mentions by this the fact that we are withdrawing our symbolic presence in these three garrisons, it is absolutely not an abandonment, it is a succession on position” in military terms. __in these three garrisons, the units of Minusma, and especially those of FAMas, are implanted, firmly implanted, and this is by no means a abandonment “, he assured in reference to the peacekeepers of the UN Mission (Minusma) and the Malian armed forces.

Reactions of the French government

Same bell sound at the French Ministry of Foreign Affairs.

« The transformation of our military system in the Sahel is neither a departure from Mali nor a unilateral decision and it is wrong to say otherwise “, said the spokeswoman of the Quai d’Orsay.

As for the French Minister of the Armed Forces, her reaction is even more virulent. Florence Parly denounces the”indecency“remarks of the Malian Prime Minister, who spoke the day after the death of a French soldier in Mali.

« There is no French disengagement, I want to start by re-establishing untruths (…) When we have 5,000 soldiers and we disengage from three rights of way, and we intend to leave several thousand more, when we deploy state-of-the-art armored vehicles in the Sahel (…) this is not the normal attitude of a country that intends to leave “, argued the Minister of the Armed Forces Florence Parly during a conference in front of students of Sciences-Po Paris.

Until then, France had 5,000 soldiers engaged in the Sahel as part of operation “Barkhane”. Their number should be reduced between 2500 and 3000.

Seen from Bamako, it looks like a disengagement, and this is enough to justify the opening of discussions with the Russian paramilitary society “Wagner“.

French leaders warned their Malian counterparts that involvement of the Wagner group in Mali would be incompatible with a French military presence and that of other countries and international organizations on the ground.