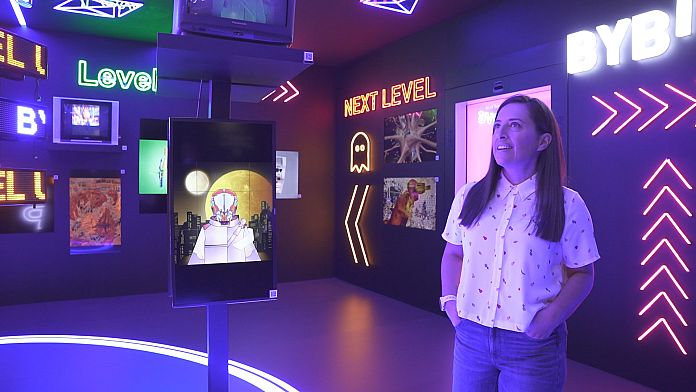 Thanks to its multitude of events and places dedicated to contemporary art, Dubai, one of the seven emirates of the United Arab Emirates, attracts creative talents. Their reception is also encouraged by the allocation of “Golden Visas”, long-term visas which allow them to stay on site for ten years instead of the usual three.

Welsh artist Julian Castaldi, for example, arrived in Dubai nine years ago to do a favor for a friend who asked him to babysit his cats, but he is “fell in love with the emirate, the atmosphere and its mix of nationalities,” he confides, and never left. “The big difference with the UK or Los Angeles where I worked is the diversity we have here,” he explains. “I’ve created works in Arabic and Hindi, which I wouldn’t have done elsewhere; it’s very multicultural, eclectic (…) and the art scene is great,” he believes.

Amrita Sethi worked in banking in Dubai until she decided to become an artist, inspired by the thriving art scene in the emirate. She recently obtained a “Golden Visa” for her “contribution to the digital art scene,” she says. “I always loved coming to Art Dubai when I was still working in the banking industry and looking for my artistic identity,” she remembers before adding: “For me, Art Dubai is really a special event.”

Art Dubai is one of the annual highlights of contemporary art in the emirate. The show has just celebrated its 15th anniversary. Welcomed at Madinat Jumeirahthat 2022 edition was the largest ever, with over 100 exhibitors from 44 countries and this year a new section was dedicated to digital art.

Visitors were invited to acquire works including NFT and explore Metaverse galleries in addition to more traditional exhibits.

“This is the first time that art can be purchased in cryptocurrency at Art Dubai,” precise Shumon Basarcurator of Global Art Forum 15. “It makes it possible to introduce this form of art to a new audience, to reach new collectors, even new generations. It’s very exciting,” he points out.

Art Dubai also has a segment called Bawwaba which means “bridge” in Arabic and which is devoted to creations from countries of the South, regions of the world under-represented on the art market

“The very international and strategic positioning of Dubai makes the emirate the ideal platform for discovering the art of the countries of the South and in this sense, we want to affirm that we need perspectives that are not Western: this includes the Middle East, all of Africa, South Asia, Southeast Asia, India and Pakistan,” insists Benedetta Ghione, executive director of Art Dubai.

The artistic district ofAlsercal came out of the ground in the Al Quoz Industrial Zone where warehouses have been converted into galleries. Fourteen years after its founding, this district remains fertile ground for innovation.

This year iconic concrete gallery presents the first-ever Ambisonic art installation on display in Dubai. “A Slightly Curving Place” invites visitors to immerse themselves in sonic creations, pushing the boundaries of traditional exhibits by embracing technology.

A few minutes walk away, the gallery Carbon 12 presents an exhibition by Michael Sailstorfer titled “Heavy Eyes” which explores materiality through a series of paintings evoking eyeshadow in industrial hues.

In the same street, Volta presents “The Guernica Project” by Raghava KK. This ever-evolving series features large-scale paintings, digital prints and NFTs that tell the story of India through cartoon characters and memes.

Reproducing the model of the neighboring Alserkal Avenue, Al Khayat Avenue is also transforming commercial hangars into artistic spaces. In particular, it houses the Efie gallery founded by brothers Kobi and Kwame Mintah and decorated with vinyl records. The place hosts an exhibition entirely dedicated to the Ghanaian artist El Anatsui, famous all over the world for his installations made from bottle caps which have been exhibited at the British Museum or at the MoMa in New York.

Art on the Moon

Dubai’s art scene is even turning to space with the Dubai-based Brit’s piece sacha jafri which will soon be the first work of art officially installed on the Moon.

After making an impression with his last painting which sold for 62 million dollarsthe artist wants to strike even harder with his couple entwined in a heart engraved on an aluminum plate, a material resistant to extreme lunar temperatures.

His creation was unveiled during a press conference inside the United States pavilion at Expo 2020. Sacha Jafri described it, explaining that he had focused on a “new hope for humanity”.

For more information, visit the page Destination Dubai on euronews.com

The unique taste of matured meat for 120 days

Natural beauty and unique man-made sites in the Dubai desert