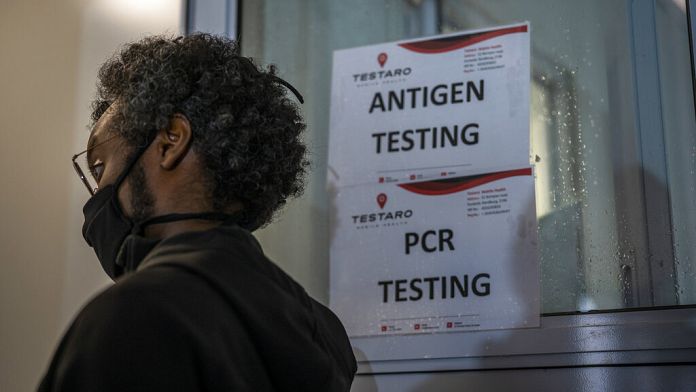 The new variant of the coronavirus, Omicron, continued to spread around the world on Sunday evening, with the first cases in Canada, causing concern and pushing more and more countries to close their borders again to foreign travelers.

Latest, the Canada announced two cases on Sunday in people who recently traveled to Nigeria and who have been placed in isolation in Ottawa.

While the pandemic has already claimed more than five million lives worldwide since the end of 2019, the arrival during the past week of the Omicron variant has been judged “worrying“by theWorld Health Organization (WHO).

Identified in South Africa, he pushed many countries to close their borders to southern Africa when they had sometimes barely reopened to the world.

WHO came to the aid of African countries, asking “that the borders remain open“. Judging himself already”punished“for revealing the existence of the variant, South Africa requested the lifting”immediate and urgent“travel restrictions. Malawi denounced travel restrictions under”afrophobia“.

Immediately, the prestigious Bambino Gesù hospital in Rome published a first “picture“of the new variant, which shows that it has many more mutations than the currently dominant Delta variant.

“Other studies will tell us if this adaptation is neutral, less dangerous or more dangerous.“, said the researchers.

The cases have in any case multiplied, in particular in Europe.

Of Netherlands, the health authorities announced that 13 passengers who arrived from South Africa on Friday in Amsterdam were carriers of the variant.

The local gendarmerie announced on Sunday evening to have stopped, in a plane which was about to take off, two passengers who had “fled“a hotel where passengers from South Africa and Covid positive were confined.

Two cases reported to Denmark also came from South Africa, just like and the three cases confirmed in Germany and the “probable” case announced Sunday evening by Switzerland.

Israel, where a case was confirmed in a traveler returning from Malawi, banned from Sunday evening the entry of foreigners and impose PCR test and quarantine even on its vaccinated nationals.

Two cases were confirmed in Australia in two vaccinated passengers from southern Africa, the day the country closed its borders to nine southern African states.

In addition to Canada, Israel and Australia, the presence of the Omicron variant is confirmed in South Africa, Botswana, To Hong Kong, and in several European countries (Belgium, Germany, Italy and the Czech Republic).

Faced with this spread, the United Kingdom summoned for Monday “an emergency meeting“from the G7 health ministers, of which he holds the rotating presidency.

In France, the detection of the Omicron variant is “most likely a matter of hours“, said Minister of Health Olivier Véran on Sunday.

The new variant B.1.1.529 represents a risk “high to very high“for Europe, according to the European Union’s health agency.

Even before its appearance, the continent was facing an epidemic outbreak linked to the Delta variant, with the reestablishment of health restrictions not always well accepted as in the Netherlands, in the French Antilles or in Switzerland. This country nevertheless largely validated a Covid pass on Sunday.

In Austria, tens of thousands of people marched this weekend against the vaccine obligation.

According to the WHO expert group, preliminary data suggests that the Omicron variant presents “increased risk of re-infectionNever has a variant caused so much concern in the world since the emergence of Delta, already very contagious.

On all continents, especially in Europe, many states are closing themselves off to southern African countries, includingSouth Africa, the Botswana, the Zimbabwe, the Namibia, the Lesotho, the’Eswatini, the Mozambique, but also the Zambia, the Malawi or theAngola According to the case. They also tighten the entry rules for all travelers.

Sunday theAngola, itself placed on the red list by the United Kingdom, became the first country in southern Africa to suspend its flights in the area.

The Philippines announced the suspension of flights from countries where the variant has been detected.

In the United Kingdom, new restrictions will come into force on Tuesday, with the return of the wearing of masks and a tightening of entry measures.

THE’Saudi Arabia extended the list of countries with which it is suspending its links, bringing them to 14. The Kuwait and the Qatar – major air hub – have also announced restrictions on nine and five African countries respectively.

As for Morocco, it announced on Sunday the suspension of all direct flights for two weeks.

In the United States, which had just reopened to the world in early November, the borders will be closed from Monday to travelers from eight southern African countries.

On the side of vaccine manufacturers, AstraZeneca like Pfizer / BioNTech, Moderna and Novavax expressed confidence in their ability to combat the Omicron strain.

It will be necessary “Several weeks“to understand the level of transmissibility and virulence of the new variant, said the WHO on Friday.

Indonesia: several dead in the eruption of the Semeru volcano