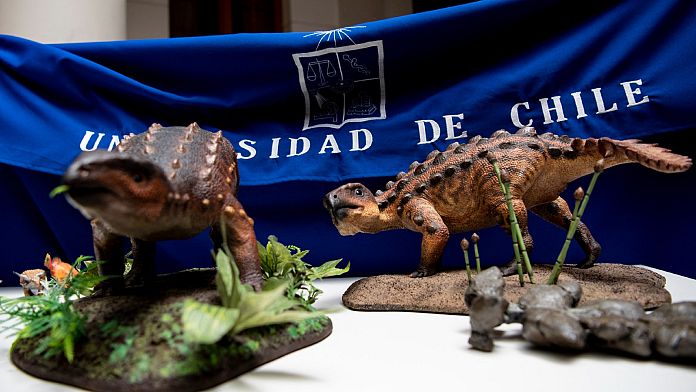 Forget the popular tyrannosaurs and other diplodocuses! If your child is keen on dinosaurs, this is undoubtedly a piece of news that can give you ideas for Christmas to enrich their collection. Chilean paleontologists have, in fact, presented this Wednesday the results of their research on the Stegouros elengassen. A skeleton of this dinosaur was discovered almost intact three years ago in Patagonia, in the south of the country. Scientists who have studied it are particularly baffled by one part of its anatomy: its very strange tail.

The dinosaur was discovered during excavations in 2018 at Cerro Guido, a site known to harbor numerous fossils, by a team who believed they were dealing with a type of animal already known until the remains of this tail appeared. so special.

“That was the main surprise (…) This structure is absolutely amazing“said Alexander Vargas, one of the paleontologists, during the presentation of the discovery at the‘University of Chile.

“Because the tail was covered with seven pairs of osteoderms (…) producing a weapon absolutely unlike anything known for any dinosaur“, added the researcher.

Osteoderms – structures of bony plaques located in the dermal layers of the skin – are aligned on either side of the tail and make it look like a large fern. The study authors also compared this anatomical peculiarity with a Macuahuitl, the club used by the Aztecs.

Paleontologists have discovered 80% of the dinosaur’s skeleton and estimate that the animal lived in the area 71 to 74.9 million years ago. It was about two meters long, weighed 150 kilograms and was herbivorous.

For scientists, who published their research in the specialized journal Nature, this dinosaur is a real “Rosetta Stone”. It makes it possible to make a link with a line of armored dinosaurs identified in the north of the continent, the ankylosaurs, but never seen in the southern hemisphere.

“We don’t know why (the tail) evolved. We know that within armored dinosaur groups there appears to be a tendency to independently develop different osteoderm-based defense mechanisms.“, explained Sergio Soto, another member of the team.

The Cerro Guido area, in the Las Chinas valley 3,000 km south of Santiago, stretches for 15 km. Various rock formations outcrop there, which contain many fossils.

It is “a kind of book that allows us to understand the succession of flora and fauna in this place“, explain the paleontologists.

It also allowed them to discover that present-day America and Antarctica were close millions of years ago.

“There is strong evidence that there is a biogeographical connection with other parts of the planet, in this case Antarctica and Australia, as we have two closely related armored dinosaurs there.“at Stegouros, said Sergio Soto.