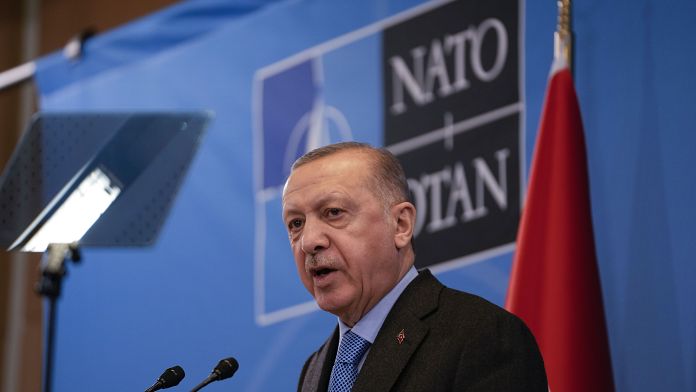 The Turkish President Recep Tayyip Erdogan on Friday expressed his hostility to the accession of Finland and Sweden to NATO, at the risk of blocking the whole process which requires the unanimity of the members of the Atlantic Alliance.

“We don’t have a positive opinion”said Mr. Erdogan, explaining that he does not “does not want to see the same mistake made when Greece joined”.

“We are currently following the developments regarding Sweden and Finland, but we do not have a positive opinion, because they made a mistake in NATO regarding Greece before, against Turkey”said the head of state at the end of Friday prayers in Istanbul.

“We don’t want to make a second mistake”he insisted.

This declaration puts a damper on a process supported so far by most NATO members and by the Secretary General of the Alliance, Jens Stoltenbergwho said he was ready to welcome them “with open arms”.

Once the decision has been taken by a third country to join, the members of NATO must in fact agree unanimously to invite it to join them.

Sweden and Finland simultaneously indicated that they wanted to continue discussing the situation with Turkey at the weekend meeting of NATO foreign ministers in Berlin.

See you in Berlin

Swedish Foreign Minister Ann Linde told AFP that “will have the opportunity to discuss” with his Turkish counterpart during this meeting, to which the Turkish Minister Mevlut Cavusoglu confirmed his participation.

The Finland had expressed his confidence in Turkish support: after having met at the beginning of April on the subject with Mr. Erdogan, his Finnish counterpart, Sauli Niinistohad then estimated on Twitter that “Turkey supports Finland’s goals”.

The Finnish candidacy, defended by the president and the Prime Minister, must be formalized by the executive tandem this Sunday, after the meeting of a government council.

And on Friday, an official Swedish report paved the way for the country’s accession to NATO, multiplying the favorable conclusions before the decision of the Nordic country and its Finnish neighbor in the coming days.

Moscow had denounced in advance a decision which “certainly” would constitute a threat against Russia and would have “consequences (…) for the European security architecture as a whole”.

However, since the beginning of the crisis and then the Russian invasion in Ukraine, Ankara has done everything to maintain good relations with the two belligerent countries, on which its economy depends closely and although it provides combat drones to Kyiv ( Kyiv in Russian).

She even hosted talks between the two twice in March, in Antalya (south) then Istanbul.

For Soner Cagaptay, an analyst at the Washington Institute contacted by AFP, this attitude “risk of making Turkey appear within NATO as a pro-Russian country, like Hungary in Europe”.

“His reasons may be legitimate, but it risks damaging Ankara’s image within NATO” he adds, judging that these objections “should have been negotiated behind closed doors”.

After decades out of military alliances, Helsinki and Stockholm, both non-aligned, are ready to officially announce their candidacy for NATO, a direct consequence of the Russian invasion of Ukraine.