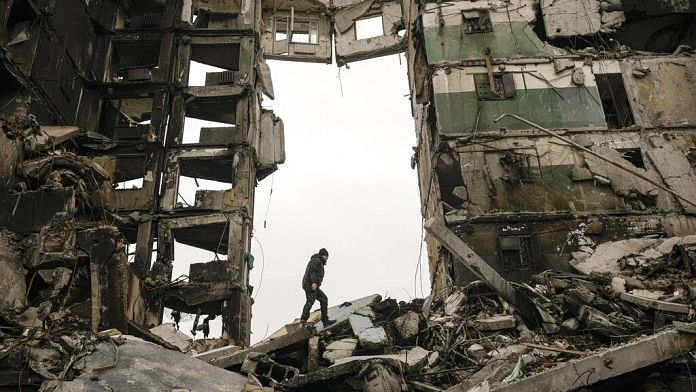 Ukraine accuses and Russia denies. Yet the images speak for themselves in Boutcha, on the outskirts of Kyiv.

While the massacres of civilians are beyond doubt, Moscow speaks of staging. However, satellite images of the city released Monday by the American company Maxar Technologies show the presence of corpses in Boutcha for several weeks, when the city was under Russian control.

These images therefore appear to refute Russian claims that these corpses in civilian clothes were placed after their troops withdrew.

“All the facts must be established and all those responsible for these atrocities must be brought to justice” he added.

denouncing “war crimes” and one “genocide“, Volodymyr Zelensky called for the implementation of additional sanctions against Moscow. US Secretary of State Antony Blinken for his part condemned a “deliberate campaign to kill, torture, rape” in reference to the drama of Boutcha.

Russian repositioning to conquer the whole of Donbass

After the recent withdrawal of Russian troops besieging Kyiv and its region, the leader of the Atlantic alliance felt that Russia was strengthening itself to “take control of the whole Donbass“, in eastern Ukraine, and realize “a land bridge with Crimea“, annexed by Moscow in 2014.

“We are in a crucial phase of the war“, he warned, saying he feared the discovery “other atrocities“committed by Russian forces in Ukraine.

Strategic bombings have already taken place, according to the spokesman for the Russian Ministry of Defense. A training center for Ukrainian operations forces and fuel depots in the south of the country were targeted with high-precision weapons.

Kyiv for its part reported bombings in Kramatorsk, a large city still in the hands of Ukraine in the east of the country. Ukraine’s Defense Ministry says it expects a “offensive“of”the enemy“in this sector, with a view to taking”control of the entire Lugansk and Donetsk regions“.

In this context, the Foreign Ministers of the Alliance will discuss Thursday with their Ukrainian counterpart Dmytro Kouleba the needs of the Ukrainian forces. “I do not want to give details, but the supply of anti-tank weapons and air defense systems is considered“, indicated Jens Stoltenberg.

Mariupol pounded, Mykolaiv in the sights of Moscow

Mariupol has “passed the stage of humanitarian catastrophe“, told AFP on Tuesday the mayor of this city in south-eastern Ukraine besieged by the Russian army, qualifying as “unlivable“the situation of the approximately 120,000 inhabitants still on the spot.

The city is destroyed “90%” and “40% of its infrastructure” are “unrecoverable“, declared Monday Vadim Boïtchenko during a press conference.

Since March 13,we have evacuated more than 100,000 residents of Mariupol and we continue to do so“, he added.

A team from the International Committee of the Red Cross (ICRC), arrested by police on Monday in an area controlled by Russian troops west of Mariupol, “was released overnight“, also indicated Tuesday an ICRC spokesperson.

This team has been trying since Friday to reach Mariupol, to facilitate the evacuation of civilians.

In Mykolaiv, a key city on the road to Odessa, residents fear they may be next on the Kremlin’s list.